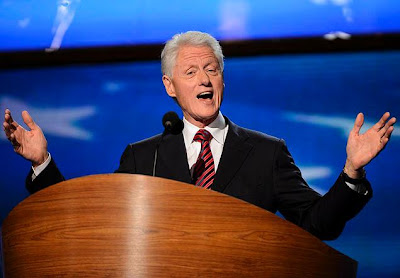 The wife and I watched both the Republican and Democratic National conventions over the last two weeks.  I watched more than I watched in my first 30 years of life.  And it wasn't easy.  A bunch of folks, not all of whom are natural speakers, who tend to say the same things over and over again can make for some long nights.  Both parties have some young talented speakers/politicians who you can tell the party is grooming for bigger and better things. They were good to listen to.  You also had those from congress who'd been around for a while and they scattered in folks from various walks of life to give the common person's perspectives on issues facing the nation.  Don't forget the wives, they get to speak too and of course the Vice President and nominee for Vice President got to speak.

I know going into these things that it is nothing more than a giant pep rally.  But there is nothing wrong with that.  Each party gets to hammer home catchy phrases while reminding you over and over again what snafus their opponent have committed.  The Democratic rally was much more raucous than their Republican counterparts.  They were also more "diverse".  Lots of funny hats, buttons, and folks not afraid to show their enthusiasm in ways that make me laugh.  It is a pep rally so why shouldn't they have fun.

Neither party went into any great specifics of how they would change or fix things.  I believe the debates is where we'll start seeing much of that detail come out.  Nope this was all about saying "our guy is better than your guy".  At the same time they both threw out quotes that gave political "experts" much to chew on and fact check.  But who doesn't stretch the truth sometimes.  And it isn't lying, it is "spinning".  You just have to remember what the conventions are all about and not get to wrapped up in expecting too much meat in these speeches.  Again, it didn't mean their weren't some very good speakers who spoke very well but I'm not ready to hang my hat on either candidate based on any one's oral skills from the conventions.

For their part President Obama and Mitt Romney played their part well.  I give the edge in speaking to the President but not by much.  Each could only be so humorous or only so tough on the opponent so their speeches didn't stray much from what we've heard before.  All the good stuff was left to those who spoke before them.

My biggest takeaway from all of this?  Bill Clinton.  It has been 12 years since he was president.  I remember those years but it is easy to forget why he was so well liked...besides all the good things he did as president.  He worked well with Republicans, the economy turned around, blah blah blah.  But that man can speak.  When he finished his speech on Wednesday night I was ready to vote for HIM.  Having a crowd who holds you up as maybe the best president ever doesn't hurt but it wouldn't have mattered.  He is good.  I'm not saying everything he said was perfect or even 100% correct.  I'll let someone else figure that out.  I'm saying that man can deliver a speech.  He also did a very good job of making arguments and counter arguments to what the Republicans said the week before.  If you haven't gotten a chance to see it you can see it here.

I don't know who I'll vote for come November.  I am undecided and the upcoming debates will go along way in my decision making process.  I do feel better for watching both conventions.  Going into the presidential race's stretch run I have a good idea of what each candidate will foot stomp and where they'll attack the other.  They now only need to fill in the blanks with some details on their plans to make it all better.  If you didn't watch the conventions I highly recommend you do so next time around.  I can't say I enjoyed all of  the speeches but I do feel better about my ability to make the best decision for me come voting day.