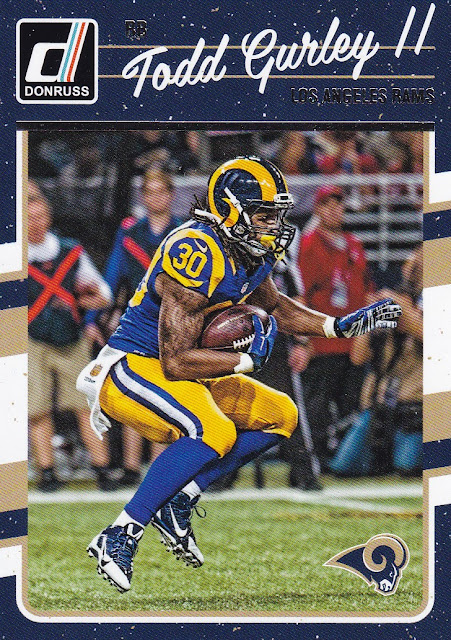 2016 Donruss Football:  This is one of the smaller packs with only 16 cards but it was still fun.  Todd Gurley is a PC guy for me and those old Rams unis are great.  If only the borders had been colored in sync with his uni.  I'm really hoping Gurley can put up some good numbers this year.  Hard seeing him not be the stud he was in '17 and '18.

Chris Moore has managed to stick around with Baltimore for four seasons but only has 47 receptions in his career.  Kendall Fuller was a part of the Alex Smith trade to Washington and was able to pick up a Super Bowl ring this season as a Kansas City Chief.  Fun looking back and young players in these older packs and seeing how things worked out.

A kicker card!  He is good mind you - 2X All-Pro as well as a three-time Super Bowl winner.  Wow that Andrew Luck card would have looked a lot different last March.  So crazy that he is out of the sport now.

Tevin Coleman rushed 5 times for 28 yards in this year's Super Bowl but only two weeks after dislocating a shoulder he wasn't able to give his all for the 49ers. Terrell Suggs was on the other side of the ball in the Super Bowl for Kansas City.  He was released by Arizona in December and picked up by the Chiefs.  That was Suggs' second Super Bowl ring.  Allen Robinson had an excellent year for the Bears with 98 receptions.  These are nice cards and this was a fun pack.  I'm always on the lookout for more of these.