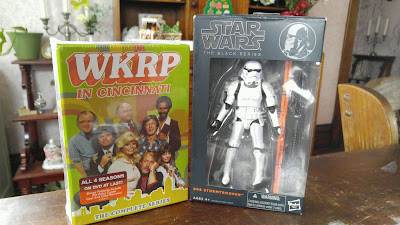 It's been a super busy month and with my scanner on the fritz posts have been few and far between.  That said this will be my 100th for the year, a new high for posts in a year.  Christmas was good as always and Santa Claus brought goodies.  The complete WKRP series on DVD and the classic Star Wars Black 6" Stormtrooper were both on my list of gifts I wanted this year.  WKRP has long been a favorite of mine so I'm excited to be able to watch this great series once again.  I love the Hasbro Star Wars Black 6" series of action figures but started too late to have this one in my collection so it was a must have.  Stormtroopers are my favorite character from the movies. 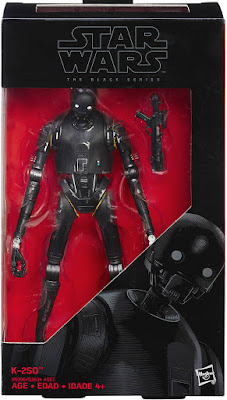 Santa Claus made a surprise visit two days later in the form of two more figures from the Star Wars Rogue One movie - K-2SO and the Death Trooper.  I saw the movie and loved it so these were must haves.  I also nabbed a box of the Topps 65th Anniversary cards which I hope to review soon.  I hope Santa Claus was good to everyone. Have a safe and happy new year. 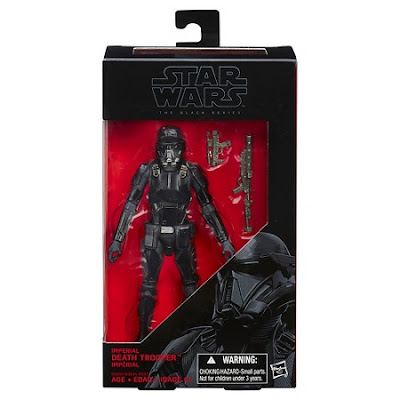 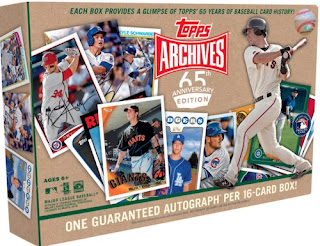 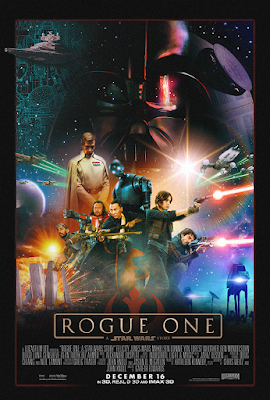 Loved it.  Star Wars: Rogue One was a great movie.  All the twenty somethings in the family loved it as well.  As the first Star Wars Movie that doesn't revolve around the characters of the original six movies I thought they knocked it out of the park. It is action packed and has the look and feel of a classic Star Wars movie.  It revolves around how the rebels captured the Death Star plans which leads into Star Wars:  A New Hope.  Along the way there are plenty of surprises especially in who we see in the movie as well where the movie takes us and how it ties into the original trilogy. While we all know who it ends getting there is the fun part. The different characters introduced are great and fit right into the Star Wars universe.

SPOILERS AHEAD: I loved all the reference to the other movies and inclusion of different characters.  You'll see Bail Organa return, Mon Mothma as well as other rebel leaders, while seeing Governor Tarkin and Princess Leia (the biggest reveal).  There are others as well to include rebel pilots and C-3PO and R2-D2.  You'll hear "It's a trap" and "I have a bad feeling about this" uttered as well.  Some of A New Hope is explained as we find out that lead character Jyn Erso's father built in the Death Star's fatal flaw as a way to get back at the Empire.  It was tough getting attached to the characters knowing that they may all die in the end (and they did) but it was for the greater good and lent more importance to what they ultimately accomplished.

I really enjoyed this movie.  The somber tone underscores how it is different from others but it does a great job telling it's story which is important to the entire Star Wars franchise.  In fact it literally hands you off to A New Hope as we see Princess Leia escape in her ship Tantive IV from the climactic battle right before what we know will be her capture but Darth Vader at the beginning of A New Hope.  Good stuff and everyone should go see this movie. 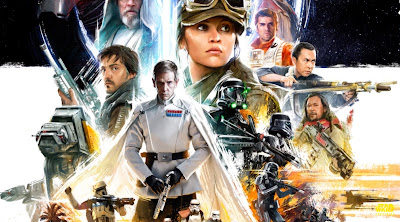