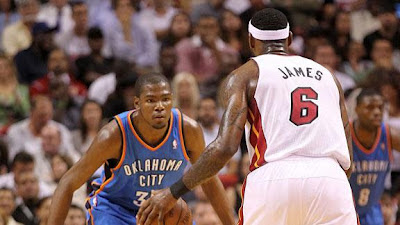 Could you ask for more?  I think not.  Both of these teams are great and together feature some of the, if not the, league's biggest stars.  I love this matchup and like so many other folks think the LeBron vs Durant matchup takes center stage.  There is a good chance they won't "D" up on each other the majority of the time but it is still the star vs star aspect that has me excited.  I think LeBron is the best player in the game and one of those special players that will be talked about forever.  In Durant we have a player whose ceiling seems to be unlimited at the age of 23.  I'm not saying this is a bad series if these two don't take center stage but I would be surprised if that isn't how it turns out.

There are other players to include Wade, Harden, Bosh and Westbrook.  They will keep things interesting when James and Durant are taking a break from hogging the camera.  I give the edge to Miami in this series.  I think that while their role and bench players are weaker than that of the Thunder the big three will help carry Miami to a title.  I'm thinking six games.  I can't see Oklahoma City wilting at this point.  They just kicked San Antonio in the teeth after going down two games to love so who knows we may even see seven games.  No matter who wins it all I only want good games that give us plenty to talk about around the water cooler the next morning.
Posted by Bulldog at 7:14 PM