1994 Coca-Cola Monsters of the Gridiron

The 1994 Coca-Cola Monsters of the Gridiron cards came in card packs inside twelve packs of soda in 1994.  The cards had NFL stars dressed in costumes for Halloween which is the timeframe I believe these were released.  I've always liked the set though I get it is a niche set. I knew someone who worked at a convenience store back in the day who would give me the packs when they'd empty packs of cans that went in their cooler and was able to assemble a full set.  Not the easiest thing back to do back then. 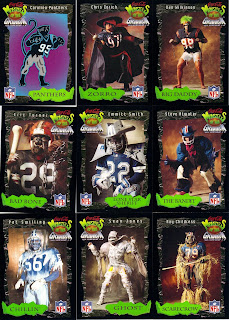 There is one star from each team and the costumes vary from very elaborate to "I'l put grass on my head" - see the Bengals' Dan Wilkerson. 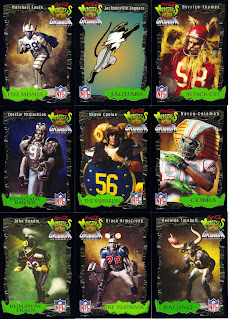 Considering the way some of these guys are dressed I'm surprised they were able to get big stars such as Emmitt Smith, Marshall Faulk, Junior Seau, etc. 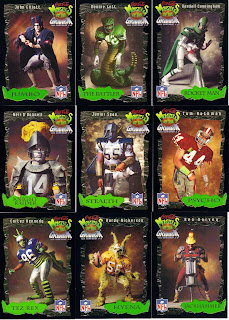 The Carolina Panthers and Jacksonville Jaguars were new to the league and didn't have actual players so those teams ended up with art cards.  Again I really like this set for it's uniqueness and fun which we don't see enough of in cards anymore.  I also think about these every October and never get around to posting.  I remembered this year - enjoy.