Should Peyton Manning Stay or Go? 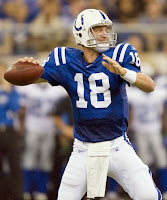 The Indianapolis Colts today lost their fourteenth game of the season securing the number one draft pick in this year's NFL draft.  They are now in the tough position of deciding what to do with Peyton Manning as they can now draft the guy everyone thinks is the next sure thing, Stanford quarterback Andrew Luck.

Peyton Manning is one of the great, if not the greatest, quarterback of our generation.  He has won one Super Bowl, been the NFL MVP four times, five time first team all-pro and I could go on and on.  Muddying the waters in Indy's decision is the fact Peyton Manning missed this season with neck injuries and will turn 36 in March.  With Manning out this year the Colts looked horrible cementing how valuable he is as it is obvious how much he carried this team on his shoulders in previous seasons.  So which direction do the Colts go?

If you'd asked me early in the season I'd say this is a no brainer.  Keep arguably the best quarterback in the NFL and see if he can get you back to the Super Bowl.  There is a risk, and probability, that Manning will not be the same due to age and/or injury but Andrew Luck is no lock to be a great NFL quarterback.  Since 1985 14 quarterbacks have been selected number one overall in the NFL draft and only four ever played in the Super Bowl.  Seems like a good percentage.  I'll also give a pass to the last two number one overall picks as they haven't really had a chance to make their mark in the NFL.  Only three would probably be considered busts. Sounds good huh?.  But looking at the Colts as a whole I'd say they use the number one pick as trade bait for more picks and young players with a big upside.  Even before this year it was obvious this team had holes to include their defense which would be considered average at best.  So keep Peyton, improve the team around him and take your shot at winning it all once again.

If only it was so easy.  The downside could be the players brought in don't improve the team enough to make a difference.  Maybe they are good players but won't make a difference until a few years down the road thus missing Peyton's window of opportunity.  While this could setup the team with some young players to help the team in the future it could also mean the Colts miss out on a possible quarterback of the future in Luck.

With Manning taking the Colts' franchise to heights it has never seen before it is hard to argue against a franchise quarterback.  So do the Colts draft Luck and trade Peyton Manning?  Why not?  This could be a win, win situation where Luck could be the next Peyton Manning in Indy and trading Manning could bring more draft picks and players to help Andrew Luck in the quest to win a Super Bowl.  Again, this sounds easy but Andrew Luck is an unknow quantity in the NFL as are any draft picks they may gain in a trade.  The Colts would also have to deal with losing the face of the franchise, a player loved and/or highly respected throughout the NFL and in fan circles, along with dealing with the possiblility of being a bad team for some time if Luck doesn't live up to expectations.

A third option would be to draft Luck and let him be mentored by Peyton Manning.  While I do like that idea it seems they both would be stuck with the team we saw take the field this year and it isn't pretty.  Again I think this is a good idea as more than a few examples of quarterbacks learning under veterans (Aaron Rogers, Phillip Rivers) has shown it can work.  And I'd love to see what any quarterback under Peyton's tutelage could become.  But this team won't move forward without help and this scenario doesn't seem to add players that will be needed to return Indy to the Super Bowl.

I will stand by my initial thoughts that Indy should stick with Peyton Manning.  While the argument for going with Luck is a very good one the flaw is he is an unknown.  While I don't think he will be the next JaMarcus Russell, who is to say he won't be?  If I'm the Colts I also don't want to lose someon who may be the best player the franchise has ever seen.  I want him to be a Colt for life and be that guy you see around the Colts franchise in some capacity for the rest of his life.  Peyton is so unique in how beloved he is, his talent and how I think he can help this team even when he isn't on the field.  I'll be curious to see how this plays out and will be more than a little sad if Peyton Manning doesn't stay a Colt for the rest of his career.  That said Indy owners and management must do what they think is best for the team. Only time will tell what the right answer is.
Posted by Bulldog at 9:45 PM