A writer on ESPN.com stated it is the beginning of spring or the baseball season when he opens his first Topps baseball card pack of the year.  I apologize but I can't find the story or the writer's name.  I took a cue from this story and grabbed me a 36 card rack pack and decided to open it up and share my thoughts.  They are nice looking cards with a small Topps logo in the upper left corner and the players name and team logo at the bottom of the card in what I can only say is a swoosh.  Not a great description but the pictures below show the design.  Overall I like the fronts as there is plenty of room for the picture.  The back has the player's stats and key information.  Quite a bit of information to include how acquired which is one you don't see that often.  Interesting that you see OPS vice OBP as a stat.  Very nice card back with colors matching the team.  Overall I like the design quite a bit.  The Derek Jeter card, #30, is a shot you've seen a million times of him in the air making a throw to first base.  I won't throw many complements towards the Yankees but this is a nice card.

Included were many event based cards - St. Louis Cardinals NLDS Game #5, Jim Thome 8th ever to hit 600 homeruns (checklist card), and Bill Mazeroski's walk off.  I liked the Cardinals card while the Thome card looks like a normal card with the event at the bottom and a checklist on the back.  Also in the pack were a golden moment (Joey Votto), gold standard (Frank Robinson) and golden great card (Babe Ruth) - I see a theme here though none of these were exceptionally attractive.  A Timeless Talents card pairing Joe Morgan and Brandon Phillips was a nice card.  A couple of league leaders cards were also in the pack.  Nothing special but I do like that the back contains the top 10 in the category and not just the top 3 shown on the front.

Again a nice set.  All pictures were in game photos so no spring training staged shots.  While the photos are very good I think the backs were my favorites.  Includes all the player's stats, quite a bit of information on the player himself, and of course the requisite Topps banter when room permits.  Below are a few of the highlights.  Pick up a pack if trading cards are something that interest you. 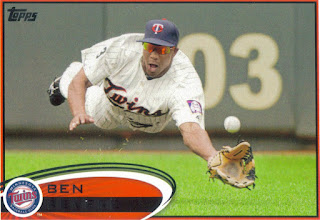 Ben Revere, #62, is a great action shot as he goes for the diving catch in the outifield.  The picture doesn't show it well but his last name is in silver and does show up quite clearly.  This is the same for all the pictures you'll see in this post. 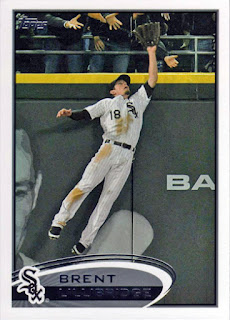 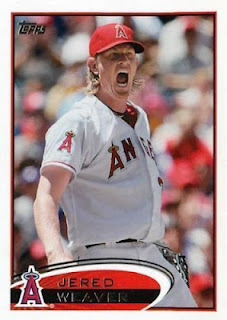 Jered Weaver, #250, is not an action shot but is still a cool picture with him showing great emotion.
Posted by Bulldog at 2:14 PM