Life In The Big City 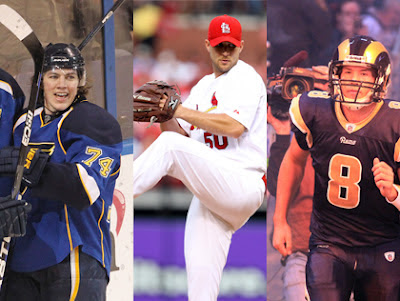 It had been 10 years since I had been in close proximity to a large city prior to moving to Illinois in 2011.  I've lived in Phoenix and Colorado Springs so I'm not new to living in, or close to, a large metropolitan area with pro sports franchises.  But I will say I had forgotten what it is like.

Being 45 minutes outside of St. Louis I get to enjoy a wealth of sports coverage.  Here I obviouly get to hear about the Blues, Rams, and Cardinals on a daily basis.  The great thing is the local media also covers the rest of the league or at least the major storylines.  This is great.  Being a sports nut I can't ask for much more.  After 10 years of being relegated to ESPN it is like the flood gates have opened.  Fox Sports plays tons of Blues and Cardinal games and carry Rams related pre and post game shows.  Other channels offer coverage as well.  Even if it is St. Louis centric I just enjoy talking sports.

Many of those I work with are locals but I'm lucky that they also follow the leagues as a whole.  It has been a while since I could really talk sports with someone.  And best of all I'm only 45 minutes from a game when I want to see live action.  Being here during the Cardinals' run to a World Series victory was almost as fun as being an actual fan of the team.  My team wasn't in it so I was free to just enjoy with my buddies.  It was a great experience.  At times I would play the foil and root for the Rangers.  It was all good fun.  Something I haven't been able to experience in quite a while.  No matter what the experience is, being near a large city has been nothing short of fun for my inner sports geek.
Posted by Bulldog at 10:01 PM

Email ThisBlogThis!Share to TwitterShare to FacebookShare to Pinterest
Labels: Sports