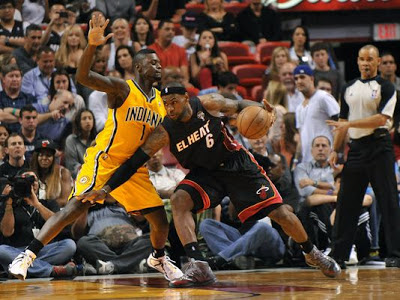 Been way too long since I've been on here but this month has been crazy busy.  I'm back for the moment and wanted to touch on the NBA playoffs while I have a chance.  My Hawks were thrown to the curb fairly easily by the Pacers.  I thought it would be more of a series as Atlanta has some talent and even thought they could win. I was wrong and the Hawks found a new coach and are looking for an upgrade to the roster through free agency this summer.

The Spurs have looked great on their run past the Lakers, Warriors and Grizzlies.  For the first time I've been able to watch Tony Parker quite a bit and wow he has impressed me.  I've never sold him short but haven't been able to watch him enough to truly appreciate him.  It helps when he torched the Grizzlies as San Antonio swept their way to the NBA Finals.  My only concern for the Spurs is Manu Gionobli.  He is not playing like his old self.  I know he's dealt with some injuries but he has to be better if they expect to win their fifth championship for Tim.  Speaking of Tim Duncan I love how he is playing.  My buddy Yaj (check out his take on the Spurs here) said Tim figured out he wasn't the low post guy anymore and losing weight helped him to get up and down the court better.  I can't argue with any of that.  He is really getting up and down the court well and doesn't plant himself on the block but is still able to get his share of rebounds.  I'm not sure this team can beat Miami, if they were to play them, but I think they could give them a good run.  They have a great mix of talent that I think lends to making Miami work on both ends.  I think Indiana would be a tough matchup with the bigs but I can't see David West outplaying Duncan and while Tiago Splitter can't hang with Roy Hibbert he would be better than Chris Bosh.

Miami looks just fine in spite of the tough series with Indiana and the fact that Bosh and Dwayne Wade are not playing up to par as part of "The Big Three".  LeBron is doing his part and doing it very well.  Can he carry this team to a championship?  I think so.  He obviously needs help (like the role players actually hitting jump shots last night) but I agree he makes everyone on the team better.  He can also take over a game as he did in the 3rd quarter last night.  I think he will be a tough matchup for the Spurs while I can't say Miami has a great answer for Tony Parker.  I think Miami finishes off Indiana Saturday night but there are definitely no givens in this series.

Indiana is playing great and I love rooting for them.  They have disappeared many times in the Miami series for quarters at a time and it has cost them the series lead.  They gave away game one in overtime letting James drive for a layup with 2 seconds left.  That was horrible to watch after they had played so well to get to that point.  I really hope they can come up with a few miracles and still pull this series out but you won't see me putting any money on it.  Not sure how their free agency situation looks for Indy but if they can keep this core together and add a piece here and there and they should be able to compete for years to come.

New York was destined to lose after most of that team went MIA in the playoffs via injury or just plain failure. Carmelo did what he did best...try to score...but that offense has to be retooled to add other options other than one on one play..........You had to love Chicago's heart with all the injuries they faced but that second round matchup with Miami doomed them.........The Warriors were another fun team to watch and I really wanted to see them advance.  They were just overmatched by the Spurs but again another team I hope can challenge for years to come..........Boston=old.........Memphis - what the heck happened there?  They were setup for success getting to face OKC with no Russell Westbrook and a Spurs team who everyone thought their bigs could take advantage of.  I like many thought they had a better than even chance to beat the Spurs.  They just didn't show up for the series.  It has to be one of the huge disappointments of the playoffs.  I'm not sure Memphis management or fans will look too fondly on these playoffs unless they can bounce back with a better effort next year..........I think there are plenty of good games ahead in what is left of the playoffs.  I can't wait.
Posted by Bulldog at 12:38 PM