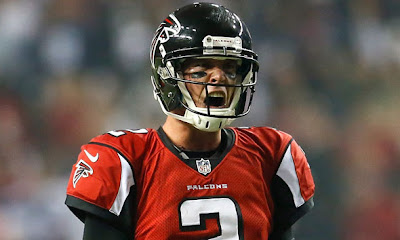 Matt Ryan and the Atlanta Falcons agreed to a 5 year $103 million dollar extension this week.  This is a great move by the Falcons.  Falcons fans, me included, have to be thrilled.  "Matty Ice" may already be the best quarterback in the franchise's history.  No disrespect to Steve Bartkowski who may be the most beloved Falcons quarterback in history (he's my favorite).  But Matt Ryan already has 56 wins in his five seasons compared to 55 wins for Bartkowski in 11 seasons.  Yes, Chris Chandler took the Falcons to the Super Bowl but his five seasons aren't enough to put him at the top and don't get me started on Michael Vick.  Chris Miller is the only other QB in the discussion but he probably at the bottom of the pack.  The next six seasons will cement Matt Ryan's legacy in the history of the Atlanta Falcons.

Matt Ryan has already won 56 games and has twice as many touchdown as interceptions (127-60) while racking up a career quarterback rating of 90.9.  He's completed less than 61% of his passes only once.  Sure he is only 1-4 in playoff games but the Falcons have been to the playoffs for four out of the last five years with the expectation being they'll continue to be there for the immediate future.  His performance puts him right there with the best there is in the game.  Don't beat him up for his playoff performances yet.  He is 27 and just entering his prime.

He is worth every penny.  This contract puts him right up there behind Aaron Roger and above Joe Flacco when it comes to dollars.  It doesn't mean he is the second best quarterback, because he isn't, but that is today's market.  There are not that many great quarterbacks and he is one of them and you aren't winning without one.  While defenses can still win games you need an excellent quarterback to score in today's pass happy era.  So while Ryan's price tag is not cheap it is the going rate and you couldn't let him walk after this season.  Waiting to extend him could have also meant the price might go up in a year.

I love this move.  If you look at the bottom half of the league and the issues those teams have at quarterback you have to feel good that we (yeah I am one of those guys) are set at quarterback for years to come.  Hopefully Atlanta can continue to keep weapons around him and upgrade the defense.  The NFC has many good teams that will continue to challenge for the top of the conference each season but there is no reason to believe Atlanta won't be one of them for the next six seasons.
Posted by Bulldog at 10:28 AM