Catching Up With the NBA Offseason 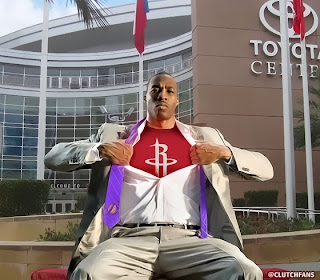 The last week has been very busy and the excitement of the Finals is carrying over for me as there has been a flurry of activity in the way of free agent signings and agreed to trades.  It has been a really exciting week and I want to talk about at least a few of the deals.

Dwight Howard signs with Houston Rockets:  It all begins and ends with Dwight Howard.  No big shock that he ends up in Houston.  I think this is the right move for him.  He is paired up with a scorer who can shoot from the outside in James Harden and is now in a town that doesn't eat it's own.  Will he win a championship?  I don't think so but with San Antonio possibly near the end of their run (2-3 years?) and Los Angeles on the down tick that leaves Oklahoma City as the team to beat.  And there is no reason to think this team can't beat the Thunder assuming Houston can put some good supporting pieces in place.  Rumors are Houston center Amer Asik wants to be traded and also that Jeremy Lin might be on the way out as well.  Hopefully they can bring back some valuable players.  Bottom line this is a good deal for all involved and I see no reason Houston can't compete in the near future.

Josh Smith signs with Detroit Pistons:  This hurts Atlanta as they lose a scorer and dynamic player.  It only hurts because there isn't a ready replacement.  Al Horford is a natural power forward and might do even better if he can move back to the 4.  Not that the Hawks have a starting center ready to take over that spot (backup Zaza Pachulia bolted for Milwaukee).  Detroit gets that scorer/dynamic player but also get a guy who isn't a classic power forward and thinks he can hit shots from the outside.  And no he can't.  But I'm sure Detroit knows this and he will fit in fine in their system.  I was curious as to where he would go and hadn't heard any rumblings about the Pistons.  All good.  Should help setup Atlanta in the future as they have some extra cap room to improve moving forward.

Andre Iguodala signs with Golden State Warriors:  I love this move.  The Warriors already have a scorer in Stephan Curry and Iguodala will fit well in the front court with Bogut and Lee.  He won't be expected to score and will be able to concentrate on defense.  The Warriors also cleared out dead wood while getting valuable cap space in a trade with Utah.  I really like what they've done and they could easily be a top four team in the Western Conference soon.

Al Jefferson signs with Charlotte Bobcats:  This team isn't going anywhere anytime soon but this gives them a legit center who can anchor the middle.  Again this isn't a conference changing move but I really thought it was a good move for Charlotte.  Jefferson for his part will be the man and should be able to rack up good numbers assuming there is anything resembling a team around him.

Jarrett Jack signs with Cleveland Cavaliers:  Another move that isn't going to be changing any futures of the league but I think he is a very good shooting guard and teaming with Kyrie Irving should be a big plus.

Andrew Bynum to ???:  The league is a weird contradiction.  It loves to run and gun while kicking to the guy at the three-point line.  Still everyone covets the big man especially come the playoffs when games tend to slow down.  So it should be no surprise that teams are looking at Bynum and even Greg Oden.  I think any deal Bynum, and Oden for that matter, gets will be one that protects the team and should give Bynum plenty of opportunity to excel.  I'll be curious how Bynum comes back and how he'll handle being in the spotlight again after rough year he had in Philly.