Celtics Blockbuster Trade with the Nets 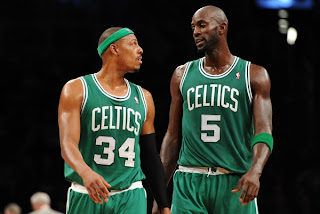 The Boston Celtics have agreed to trade Kevin Garnett, Paul Pierce and Jason Terry to the Brooklyn Nets for forwards Kris Humphries and Gerald Wallace, along with guard Keith Bogans, and first-round picks in 2014, 2016 and 2018.  This is one of those blockbusters in which both teams win.  New Jersey gets a short window in which they can expect to be the third maybe even second best team in the Eastern Conference.  Their staring lineup will consist of Garnett, Pierce, Deron Williams, Joe Johnson and Brook Lopez.  Not a bad starting lineup for new coach Jason Kidd.  The price they pay is a short window considering the age of the three Celtics they received and one heck of a bill from the NBA for being over the salary cap.  Boston for their part will get some flexibility going forward in rebuilding their team.  The three draft picks will probably be late round picks (maybe a mid rounder by 2018) so don't expect LeBron James with any of these picks.  Still any rebuilding effort needs young players so three extra first round picks over the next five years is a good thing.  They can also be used to trade up or trade for veteran players when the team is on the uptick.  It'll be interesting to see how this plays out and how history views the trade.  There is a good shot at this being a wash.  Draft picks are always shot in the dark and the veterans the Nets received could all fall apart tomorrow.  No matter how it comes out I give both teams credit for making a bold move.

NBA NOTES:
Looks like the Spurs will resign Tiago Splitter for four years at $9 million per year.  Not surprising even though Splitter played poorly against the Miami Heat in the NBA Finals.  Splitter is a good fit in San Antonio though I still would have liked them to add a true big man who can defend the rim better........Clippers' Caron Butler and Eric Bledsoe to Phoenix for shooting guards J.J. Reddick (Milwaukee) and Jared Dudley (Phoenix).  L.A. and Phoenix each send a first round pick to Milwaukee.  Another trade I like for all teams involved.  Clips get shooters while Phoenix get a starting point guard and a three who can score while the Bucks get picks to help them build around one or more their free agent guards.......I think Dwight Howard should take his talents to Atlanta.  Would my Hawks get past the second round with him?  Doubtful but it would awesome to have a top tier player in the fold, which is something Atlanta hasn't had in a very long time.  But that won't happen.  So I think he should go to Houston.  I think they have the best shot do anything long term and pairing him with James Harden seems like a great deal.  Wherever he goes I hope he can settle down and repair his more recent legacy of being that wishy washy guy that everyone hates........David West is returning to the Pacers.  With Danny Granger returning from injury there is no reason to think Indiana can't once again be the number two team in the East.
Posted by Bulldog at 6:34 PM