Atlanta Hawks to the Conference Finals for the First Time in FOREVER! 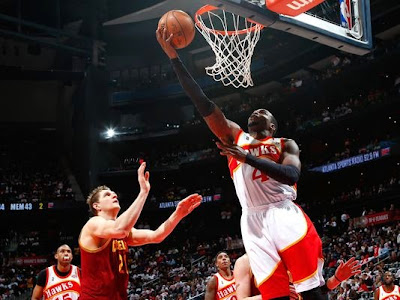 I can't say I'm surprised Atlanta made it the conference finals.  No slight on Washington who I was high on during the regular season but I thought Atlanta was the better team.  Maybe not playing as well as the Wizards before the series but Atlanta the better in my book.  It was a good series and I have to admit I was worried when Paul Pierce hit that game tying shot at the end of game 6.  I was very concerned about the prospects of an overtime period with Washington having the momentum.

Still the Hawks haven't been playing at the top of their game which they showcased for the first 62 games of the year.  Kyle Korver and Jeff Teague are both hitting under 40% and Dennis Shroder is shooting right at 40% in the playoffs so far.  That has to change if they are to beat the Cleveland Cavaliers.  DeMarre Carroll and Al Horford are the only players bringing their A game right now and as with the rest of the team you can't count on either of those player to carry the team.  They have to play well as a team.  Spread the ball around while making that extra pass to get the open shot.

Cleveland can be beat.  I think Teague and Shroder will need to drive on Kyrie Irving making the defense collapse while also making him work on defense.  When they are aggressive good things happen.  You aren't going to stop LeBron James so I say don't throw everyone at him trying.  I think DeMarre Carroll can do a decent job on him as he is a good defensive player.   Still LeBron will get his.  That is ok.  I think if they can slow Irving some and make LeBron have to carry the team the Hawks a shot.  Irving is a great player so that is asking a lot.  Still I think it would put pressure on James and gives the Hawks a chance at winning.  The Hawks also have to make shots.  They aren't shooting well right now with the exception of Carroll (43% on threes/52% overall).  Horford is hitting big shots and shooting well (49%) but while he gives you the total package to include being this team's leader he can't carry the team.

Hit shots, make Cleveland work on defense and maybe Atlanta catches some breaks and wins this thing.  I'm not sure they are up to it but I'm definitely excited to see them  in their first conference finals appearance since 1970.  This is big for the Hawks and their fans.  I'm stoked.  Go Hawks!
Posted by Bulldog at 6:59 PM