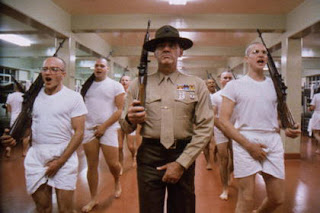 Veteran's Day was last week and first I'd like to thank all those who have served our country in the military.  I'd also like to use this time to point out my favorite war movies.  Defining what a "war movie" is can be tricky in itself since pretty much any movie invovling two opposing forces fighting would meet the definition.  For my purposes I'll define a war movie as a movie set in a war starting with World War I through the present time.
Black Hawk Down - This is a great movie that I can watch any day of the week and twice on Sundays.  For me the movie presents an accurate representation of how I think the events would have looked.  I find the movie very believable and not over the top while it shows how our military can fail.  I think this movie should be in everyone's library.  I've also read the book multiple times and could read it cover to cover if time allowed.
Saving Private Ryan - Could easily be my #1.  Great portrayal of how battle would have looked in WWII and it wasn't pretty.  Great characters, visuals and action.  A friend of a my brother-in-law allowed me to see this in his home theater shortly after it's release and I was blown away.  I really enjoy being able to plan out the three hours to watch this movie and give it all my attention.  I'm never dissapointed.
The Great Escape - Circa 1963 this movie had a great cast to include Steve McQueen, James Coburn, and James Garner among many, many others.  Based on actual events this movie shows a massive escape effort by allied prisoners from a German POW camp during WWII.  The acting really makes this movie though they also did a great job with the visuals and and sets.

The Devil's Brigade - This movie shows WWII Canadian special forces pressed to join up with American forces who aren't up to standards. The resulting tensions as they train for their mission make for a very entertaining movie. Yes they finally get to go kill the bad guys, Germans in this case, but it is the interaction of the two very different troops that make this fun to watch.           MASH - This movie is just as funny if not funier than the TV series it spawned.  With an "R" rating it was also able to ratchet up the raunchy humor I'd expect more from the military. While all done for the joke I believe most of the situations could definitely happen in this situation.         The Green Berets - John Wayne was near the end of his career when completing this movie but he did a great job portraying a Colonel taking over an outpost while battling a tough North Vietnamese enemy.  While not the most accurate depiction of combat life during the Vietnam war it still depicts many of the issues that would come to define our militarie's issues in the war.

The Dirty Dozen - Another great ensemble cast that led to great movie showing military members who were in jail chosen for a harrowing mission behind enemy lines.  Just one of the classics you have to love.

Good Morning Vietnam - Robin Williams was at the top of his game when he played an Airman brought in to DJ for the military during the Vietnam war.  Way too many funny lines in this movie to pick out just one, the movie also shows the multitude of issues soldiers had to face on a daily basis.

Full Metal Jacket - This movie rocks from the word go.  Subtle humor to the dramatic plot lines it shows the war from the skeptical viewpoint of "Private Joker".  Another movie everyone should own.