It is the start of baseball season which means baseball card time.  I picked up a rack pack of the Topps 2013 Opening Day and one rack pack and regular pack of the 2013 Topps basic set cards.  The only difference seems to be the Opening Day logo on the Opening Day cards.  From what I can find the actual pictures are the same.  First impressions are good.  Most of the pictures are basic batting fielding/pitching/hitting pictures but I can't complain.  They are nice looking shots on the cards.

The front of the basic cards has the Topps logo in the up left hand corner.  The border of the cards is white.  The team logo is in the bottom right of the card with the players name to the left of the logo in grey, maybe silver.  The player's position isn't on the front, which is something I like, but it isn't something I can't live without.  The primary color of the player's team borders the picture and is part of a "swoosh" curved area at the bottom.  Horrible description so look at the pictures to see what I'm talking about.

The back contains major and/or minor league stats.  All the major stats are included but I'd like to see on base percentage on position player cards though the cards do include OPS.  Also included is the players height, weight, bats, throws, hometown, how they were acquired (one of my favorites), birth date, and where born.  A career chase section also has states how far away the player is from catching an all-time record.  Example:  Jose Altuve is only 4,028 hits from catching Pete Rose though they don't use his name.  Not using Rose's name was somewhat of a story before the set came out.  I don't care one way or the other.  There is also an interesting factoid for each player on the back of he card.  I like most of them but I don't doubt some folks could do without them.  I think it adds character.  There is little color on the back.  What is there is the primary color of the player's team with it being across the top and highlighting the stats headings. 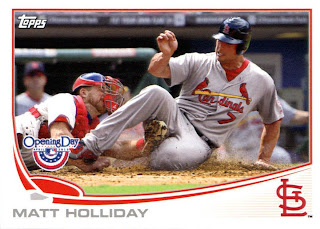 Not much in the way of inserts in the opening day pack. I did get one mascot (San Diego's Swinging Friar), Superstar Celebration (Alfonso Soriano), and Play Hard card (Dustin Pedroia). None were spectacular but I do appreciate the mascot cards.

The basic set has some parallel cards to include some I received.  One emerald foil and three blue border cards which are specific to cards purchased at Wal-Mart.  I also had three league leader cards, one rated rookie and one Giants World Series card (game 4).  The basic set had much more in the way of inserts.  I am someone who really likes cards of retired players so the four chasing history cards were really fun.  Stan Musial, Harmon Killebrew, Cal Ripken Jr. and Mariano Rivera were the four I received.  Nice looking cards (see below) with minmal information on the back talking about where the player stands in pursuit of an all-time record.  I also received one 1972 Topps mini replica (Chris Sale), two Calling Cards (Sabathia and Pujols), one Cut to the Chase (Ryne Sandberg), and a Chasing the Dream (Jacob Turner) card.  I like the Calling Cards style which reminds me of the Gypsy Queen set.

Overall I enjoy these cards.  It is what you come to expect from Topps.  Solid cards that aren't too flashy but get the job done.   I like the pictures to be a bit more imaginative but again they are good shots that I can't complain about.  Example:  Though Heath Bell had a horrible year I liked his photo to the left.  That is the kind of thing I'd like to see more of.  I'll definitely pick  up more and again give Topps a thumbs up on this set.   Click here for a link to the checklist of the series one basic set. 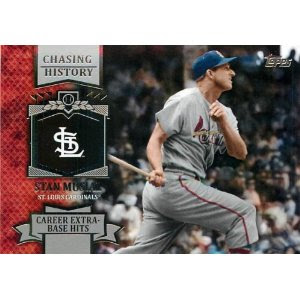