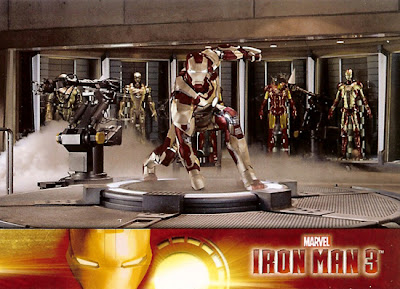 Saw the Iron Man 3 tradings cards at Wal-Mart today and picked up a pack.  I believe the set was released on the 24th.  There are five cards in each pack and it sold for $1.48.  Inside were all cards from the basic set, no inserts, to include #5 seen above.  A "banner" runs the length of the card on the bottom front of each card.  The fronts have the Iron Man 3 logo to the right and bottom of each cards which are horizontal.  The Marvel logo is just above that.  In the left of the banner is the Iron Man helmet/artwork.  The pictures are nice.  Pretty standard fair for movie trading cards of today but I do like the lack of a border which maximizes the area for the photo.

The back of the card is shaded in red with the card number in white in the upper left hand corner.  Along the bottom is the upper deck hologram, their logo, the Marvel logo, and the same Marvel/Iron Man 3 logo from the front.  To the left on the back is a circle with a cropped image of the front picture inside of it.  To the right is a small description to go along with the front picture.  Again everything is shaded in red.

Below is a breakout of the set and chase cards:

Overall I like the set.  Again it is pretty standard fair for today's movie card releases.  For a movie aimed at the younger crowd I do like the price point even if it means you only get five cards in each packNot sure I'll pick up more packs but I'd definitely tell anyone interested that they should.  .