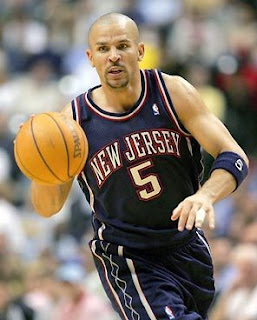 This will be a drive by blogging and to be honest I'm not even sure why I'm doing this.  I think it is because Jason Kidd is an enigma to me.  His numbers alone tell you he is a first ballot hall of famer - 2nd all-time in assists, 16 times he was top ten in assists per game (led 3X), 2nd all-time in steals, 12 times he was top ten in steals per game (led once), and 3rd all-time in 3-pt field goals.  He carried two lackluster New Jersey Net teams to back-to-back NBA Finals appearances (Kenyon Martin, Keith Van Horn, Kerry Kittles, Richard Jefferson were the best teammates among those two teams) and won a championship with the Dallas Mavericks near the end of his career though he was still dolling out over eight assists a game.

Still, when I think of him I don't see a hall of fame player even in the face of overwhelming stats and testimony from about anyone who has seen him play.  One of my biggest complaints, and the same one I have against Allen Iverson (for that matter I could almost right the same post about Iverson), is Jason Kidd couldn't shoot.  That isn't the end all for point guards I know.  But this guy only hit 40% of his field goals for his career to include nine seasons under that percentage.  He did develop some consistency with his shot behind the arc later in his career (seven seasons over 35%) but he will never be mistaken for Dale Ellis.

I don't really think I'm making an argument against Jason Kidd as much as I just want to say he doesn't cut it for me.  I don't like players who can't hit shots consistently.  For as many plays as he made at the point, how many points did he cost his team by missing shots?  Yes he is a point guard and only averaged 11 shots per game in his career.  I've got to let it go.  I can't tell you how many times I've had this same argument about Allen Iverson (though he shot a heck of a lot more).  There is just something about these guys and their lack of shooting ability that really turns me off.  It is my loss as the rest of the NBA rooting world seems to be OK with it.  I'm done now and will let this argument go...for now.
Posted by Bulldog at 7:39 PM