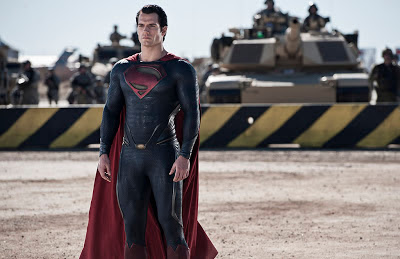 Watched Man of Steel yesterday with some family I'm visiting.  Excellent movie.  As my daughter texted me earlier in the week, "they got it right".  Superman isn't the easiest character to make a movie about and we haven't had a good Superman entry since Superman II in 1980 which also featured Zod as the bad guy.  Since then III and IV and Superman Returns all flopped.  Fans and critics alike were not impressed.  I'm not saying this movie was perfect but it was a very good movie and the two hours and 23 minutes flew by.

The acting was very good from Henry Cavill (who I didn't know of) as Superman, Amy Adams (Lois Lane), Michael Shannon (Zod), Diane Lane (Mom), andto the two dads, Russell Crowe and Kevin Costner.  All characters were cast well and I was pleasantly surprised by how much air time Crowe and Costner received.

The plot/storyline was solid.  Easy to follow as they really fleshed out Superman's back story which I thought was a big positive for the movie.  Basics are Superman sent as a baby from a dying planet to earth and raised by humans.  Bad guys from said planet arrive later to retrieve Superman and take over planet.  Fighty fighty ensues.  Lots of action in this movie as it should be.  From what happened on Krypton to the end there was plenty to keep you entertained.  The best part is when foes with superhero strength fight there should be massive destruction.  The movie didn't disappoint in this aspect.  Some movies with superhero's have masked what might truly happen.  Not here.  These guys fight a big boy fight and there is tons of ruin left in their wake.  The massive violence accounts for the PG-13 rating.  The only goofy thing was what seemed like 30 minutes of previews we sat through.  We all agreed the amount of previews was long.  Hopefully it isn't the same everywhere.

I highly suggest anyone on the fence go see this movie.  It is action packed, easy to watch/follow and should make a Superman fan out of many who get to see their first good Supes movie in over three decades.  Hopefully the trend will follow with the sequel that is sure to follow.