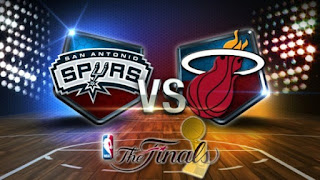 First, I think Miami wins this series.  I also think it will go seven games.  I also think it will be a great series.  Considering my history of picking this bodes well for the Spurs.  And I will be rooting for the Spurs every bit of the way.  I'm not what I would consider a fan of the Spurs but I loved the old George Gervin, Artis Gilmore days and was a fan of many of their players over the years (Alvin Robertson, David Robinson, Sean Elliott, and others).  So I've followed them for some time and my pal Yaj is a huge fan so Spurs discussions are not hard to come by.  See Yaj's coverage of the Spurs this postseason here.

I won't go too in depth here because, one, I'm not that smart and I really just want to throw out how I feel about the match ups.  For me this begins and ends with LeBron James.  Guarding him will fall to Kawhi Leonard.  He is a good defender but James is just short of Superman.  Good luck Kawhi.  Of course he will get help and I know Gregg Poppovich is gearing his defense to maybe not Stop LeBron but to limit the damage he does.  Make him take tougher shots, no easy drives to the basket, etc, etc.  Same think every other team has tried to do with varying success.  You just have to know he will get his 25 points, 7 boards and 6 assists.  What you don't want him to do is take over games where he elevates the Heat on his shoulder and his teammates all look the Robin to his Batman.  I think making his teammates better is his best attribute.  Bottom line:  make things tough on him while not allowing the Heat players to get into any type of rhythm.  On the other side Leonard is having a good playoffs and I hope the stress of guarding James doesn't hurt his overall play.

Dwyane Wade must play better.  He doesn't have to score 20 a night but he must at least hit layups and those close to the basket shots he hasn't been able to hit consistently in these playoffs.  The good news is Manu Ginobli is also playing poorly so his job on defense may not be so tough.  Danny Green needs to continue his good play if Manu can't find his game.  Chris Bosh just has to show up, rebound and play a little D.  He was so outclassed by Roy Hibbert.  In this series he just can't put up any four point four rebound efforts or the Heat are in trouble and Tiago Splitter is an opponent he should be able to get his stats against.  Mario Chalmers and Norris Cole get to guard Tony Parker.  Parker is probably the hottest player coming into the Finals.  Can they keep up with him and play defense that will make him actually work?  I think they have as good a chance as any but those aren't the best odds.  Tim Duncan has the edge against any power forward (probably Udonis Haslem) Miami can put up against him.  He is running the floor great and I'm hoping he still has some water from the fountain of youth around.  How can you not like Gregg Poppovich over Eric Spolstra?  Poppovich will truly be the master if he can help San Antonio pull out a win in this series.

I think Miami is the better team.  Much of that is because of LeBron James.  Indiana proved the Heat are flawed and can be beaten.  But they were a different type team.  I can't wait to see how this series plays out.  There will be those players who come out of nowhere and have great games and some of the stars who have bad nights.  That is normal.  It will be all the little stories inside the games that will make this special.  I am excited and can't wait.
Posted by Bulldog at 7:37 PM