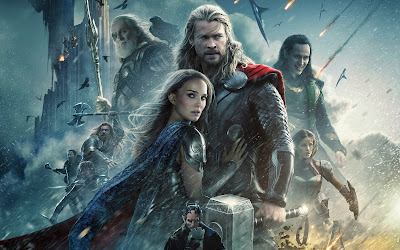 I was able to see Thor: The Dark World this weekend.  Since it just came out I won't throw out any spoilers in my review.  If you liked the first movie you'll like this one.  Thor The Dark World is not as grounded on earth as was the first movie.  I enjoyed this as I think there are tons of different worlds and different peoples to explore in this "universe".  Natalie Portman's character, Jane, and her relationship with Thor is front and center of the movie but this is not a chick flick.  Plenty of fighty fighty for everyone.   Loki has been one of my favorite characters throughout the first Thor movie as well as in Avengers.  Again he plays a pivotal part in the movie.  Thor, himself, gives us what we have come to expect from his character.  I think Chris Hemsworth does a great job bringing his character to film.  Marvel overall has done a good job adapting Thor to the movie screen, something I thought would be very hard to do.  As with any movie there are minor plot points someone could haggle over but it isn't worth it.  Too much good in this movie not to see it.  I highly recommend it to everyone.