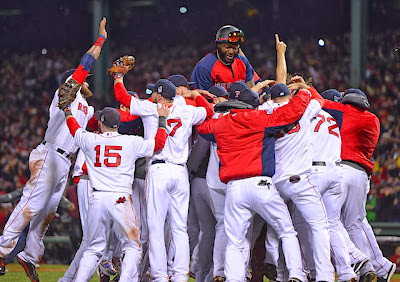 Boston won the 2013 World Series 4 games to 2 over St. Louis.  And Big Papi starred when the majority of Red Sox bats went silent.  The stats can be found here but the highlights for Ortiz are a .688 batting average, 2 homers, 8 ribbies, 8 walks, only 1 strikeout, .760 on base percentage, and 1.188 slugging percentage.  Wow.  He has always been a huge leader on this team and they needed him this series as no other Red Sox player hit above .250 and six players with 13 or more at bats batted under .190.  Considering the zoo the Red Sox were last year when they lost 93 games, to the bombings during the Boston Marathon this year, winning 96 games and taking the championship in six games it has been a heck of a ride.  See the speech heard round the world here when Papi said "This is our f******* city".  I don't doubt he used some colorful language during his dugout pep speeches that got so much attention.
While Papi will get all the accolades the pitching staff deserves their own praise.  Overall they excelled with a 1.84 ERA while walking only 11.  Jon Lester was marvelous in two starts going 15 1/3 innings and giving up only one run while winning both games.  John Lackey was also very good in his two starts winning one while giving up four earned runs in 14 innings.  Clay Buchholz added another good start and Jake Peavy kept them in the game in his start.  In the bullpen, Junichi Tazawa, Koji Euhara (2 saves), and Brandon Workman gave up zero earned runs in a combined 10 plus innings.  Felix Doubront gave Boston much needed innings in relief of Peavy's and Buchholz's short stints as starters, and did it well registering a 1.93 ERA in 4 2/3 innings.  To me the pitching staff as a whole deserves huge kudos for what they were able to do against a very good St. Louis Cardinals offense. 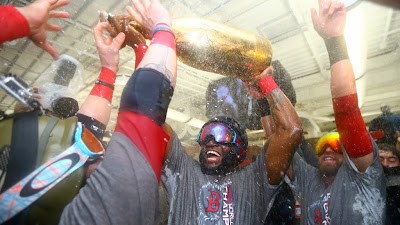 While the St. Louis offense did have a tough time against Red Sox pitching they actually had their chances but couldn't come up with the timely hits that Boston did.  One thing that stood out about St. Louis was their young pitching.  They seem primed to continue to be a power house in the National League as long as they can figure out the shortstop position and maybe add another bat.  Michael Wacha, Trevor Rosenthal, Carlos Martinez, Kevin Siegrist, and Joe Kelly all played well and again make the future for the Cardinals look bright.
Being a Red Sox fan in the St. Louis area this was really fun.  Talking games every morning was a great experience no matter who won.  The Cards fans here show their pride in mass and I take my hat off to them.  I was even able to catch a game with a buddy of mine whose a St. Louis fan.  It was game three so the ending was a heart breaker but I really enjoyed.  It doesn't get much better than that.
I don't want to forget manager John Farrell.  The team he was handed was no slouch but they weren't picked by anyone not a Red Sox homer to win the World Series.  He made some mistakes in game two but that didn't take him off his game and he made the right lineup changes when needed and kept his team up to the task.  Good job.
That's all I got.  It was a great World Series with tons of good pitching.  How could you complain?  Well, assuming you aren't a Card's fan.  I've already received my World Series Champs shirt, a World Series shirt and I'm thinking of picking up the beards shirt.  This is awesome.  I'll enjoy for the next few months until spring training starts up.  Great stuff.  GO BOSOX!
﻿