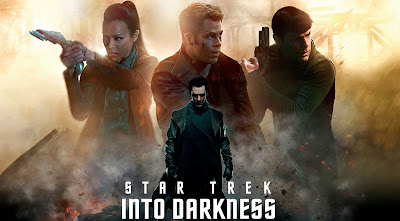 Possible spoilers in this review:  I didn't get to see this one in the theaters so I was excited to watch it yesterday on Blu-ray.  I enjoyed the first movie and couldn't get a good feel from the previews on how this movie would play out so I was skeptical.  Boy was I surprised.  They did a great job with this movie.

From the beginning the crew is setup for failure against their nemesis Khan.  The character is the Khan we all know and "love" but it is a different take/storyline for him.  Again I was leery but I like it.  All the characters get plenty of screen time but I would like to see them fleshed out a little more.  They did a good job setting them up the first film but outside of Kirk we don't get to see much of who they really are.  I know this is a big cast and time doesn't allow so this isn't a gripe just a preference.

As for the plot it isn't too convoluted and gives you enough twists so that nothing is easy in the crew's world when trying to figure out what to do.  I thought all the tough decisions that had to be made were more of a nod to what makes Star Trek great as opposed to the first movie which was pretty straight forward - there is the bad guy, go get him.  This time the lines are blurred which makes for a much more fun times.

The movie has plenty of nods to the Star Trek franchise to include Dr. Carol Marcus who joins the crew.  This sets things up for possible future movies.  SPOILER:  I also like that Khan is ultimately kept alive.  He is a great character who can be a foil for a long time to come.  As with the original movie with Khan in it we had the great yell "Khaaaaaaaaan" but this time it is Spock who gets to deliver the line as the roles are reversed and Kirk "dies".

Another good film everyone who is remotely interested in the franchise should see.  I was not disappointed.