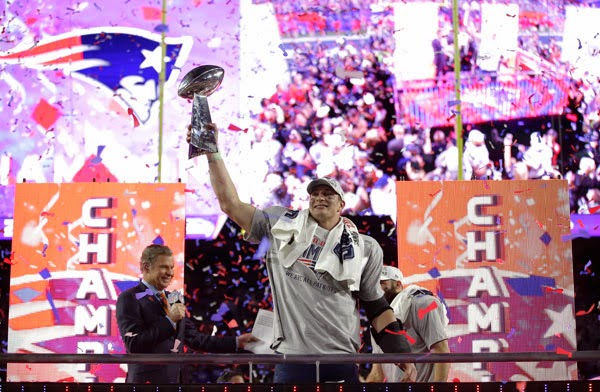 They did it and they did in about as exciting a fashion as you could imagine.  Tom Brady, Bill Belichick and the New England Patriots defeated the Seattle Seahawks for their fourth NFL title.  This puts Brady and Belichick in some elite company among quarterbacks and coaches with four Super Bowl wins.  This game lived up to the hype.  Going down to the final seconds after two New England fourth quarter drives to take a 28-24 lead.  Seattle, as they did at the end of the first half went right downfield and again looked like they'd score a touchdown this time to win the game.  And then little used, even less known rookie cornerback Malcom Butler jumped a route and made a fantastic interception to seal the victory with 20 seconds left.  A great breakdown of the play can be found here.  Tom Brady was smartly named the MVP.

What a game.  I think we were able to see the best of both teams throughout the game.  The Patriots' offense looked as good as ever on their four scoring drives and had it not been for a horrible Tom Brady pass on the first drive of the game, that would have been five drives.  Their game plan wasn't the most sexy but the dink and dunk got them 28 points in the end helped by an offensive line that did very well at protecting Tom Brady.  Their defense also stepped up big in the fourth quarter with stops on Seattle.  Yes, they did play poorly at the end of both halves but they played well when it counted allowing Brady and the offense to retake the lead.  And then with 20 seconds left they made maybe the biggest play of any Super Bowl ever.  New England showed they deserved to be champions.

Seattle also showed they deserved to be there on the cusp of winning their second straight title.  While the offense wasn't spectacular it did show some brilliance but too many times didn't show enough of what made them so good.  That run option is almost unstoppable, or so it seems and I thought they didn't showcase that enough.  Marshawn Lynch was very good and I thought they should have counted on his and Russell Wilson's legs more.  The defense was not as stout as I expected it to be.  The injuries probably played a part but even a dinged up Seahawks defense is better than probably 90% of the league.  Still they weren't quite up to stopping the Pat's offense when it counted and they just didn't seem to have those "oh wow" moments where you thought "now this is the Legion of Boom".  That swagger just wasn't there.

Again a great game!  I can't say enough about how fun it was to watch.  I of course rooted for my Michigan guy in Tom Brady.  I felt good when the Patriots took the four point lead with just over two minutes left in the game but it was nagging at me that Seattle had way too much time left to score.  They didn't disappoint.  Then came "the call".  Don't hate on it.  It might not have been smart, or maybe it was.  Maybe it was the execution.  I'll never know.  But as Tom Brady said after the game "I'm glad they ran it".
Posted by Bulldog at 8:39 PM