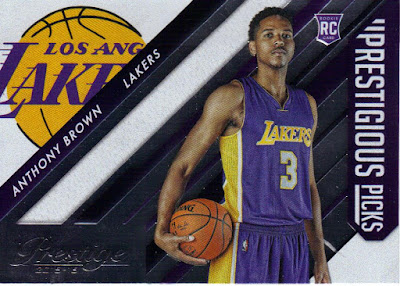 Grabbed me some 2015-2016 Panini Prestige NBA cards.  I like them.  I'm not normally into foil on cards.  I was good with it early on in my collecting years.  Probably when it was new and the "happening thing" on cards.  Now it is just distracting. 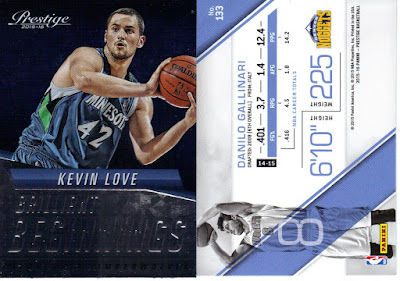 The fronts of the cards are mostly picture which is always a good thing and the photos are nice.  The backs have way too much going on.  If they were going for something different they did it.  I won't complain but I would prefer something a bit more traditional when it comes to the stats otherwise I enjoy color and different, I think.  I pulled a Prestigious Pick, Brilliant Beginnings and Rookie card to go along with the base cards.  I liked the base cards and the rookie card but the other two really didn't do much for me.   Among the base cards were LeBron James, who I almost never pull, and Kevin Garnett back in his Timberwolves uniform.

I'll definitely pick up more of these cards.  The design and the pull will have me coming back.