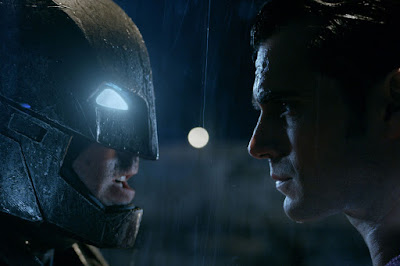 SPOILERS AHEAD:  Finally saw Batman v Superman: Dawn of Justice.  I will say I enjoyed the movie but I also see why it gets the criticism it does.  Many parts of the movie are over done or just make you shake your head.  You shouldn't walk out of a movie asking "why" about so many things.

The plot point of Batman thinking Superman should be destroyed due to his unchecked power and the destruction he caused is an old trope especially used when two characters don't know each other.  This is the basic gist of the movie.  It isn't a bad one either but the details are where this movie trips up.  I liked all the actors in their rolls.  I didn't think I'd like Ben Affleck as Batman but did.  Still as you watched the movie there were too many questionable plot points or ways in which they handled the characters.

So Batman tries to kill Superman.  Fighty fighty ensues while Lex Luthor manipulates things in the background.  This wasn't fleshed out enough and leaves things hanging at points.  He actually sets the big fight in motion by blackmailing Superman into trying to destroy Batman.  The point in the fight where they finally talk just didn't ring true.  Just as Batman is about to kill Superman, Clark mentions his mother who was kindnapped by Luthor.  Now they are friends.  All is forgiven.  It just all happened too quickly.  Batman had been hell bent on killing Superman and this turned it all around.  Then Luthor unleashes his big weapon in Doomsday who is General Zod's now mutated lifeform.  Doomsday is all powerful and Wonder Woman shows up in the end to help the boys.

Between them they kill Doomsday but Superman dies in the process.  Movie over.  Along the way we find out Luthor is tracking others with super power who will turn out to be Flash, Aquaman, and Cyborg.  I enjoyed Luthor's character and again think he is good as a puppet master.  There were just too many holes  to overcome.  Bottom line is I enjoyed the movie but I'm also left knowing it could have been so much better.  I think the "Big Three" are great characters to build around but it doesn't mean they don't need good writing.  This movie will make tons of money but it will continue to be criticized heavily.  If you are at all interested, go see it.  There is enough good stuff to see it in the theaters and not wait until it comes out on DVD.