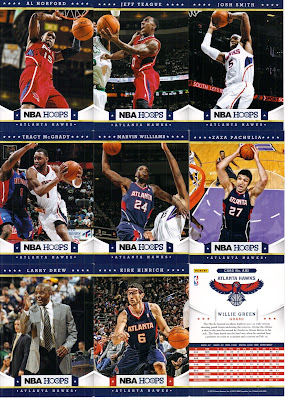 Back to the Atlanta Hawks Panini Hoops team sets I purchased and wanted to review.  Since I did the 2010-11 set last time I would normally do the 2011-12 set today.  But I can't seem to find the package or cards.  You wouldn't think it would be something I'd lose but I have.  I'm sure it will turn up and will just move on to the 2012-13 set.  The set contains 10 cards ( I only scanned nine leaving out the Jannero Pargo card).  I received seven base cards though I am missing number 150, Joe Johnson.  What the heck?  I also received three cards numbered AH1-AH2 which I can't seem to find on the checklist.  Still I'm really bummed Joe Johnson wasn't included.

Not bad looking cards.  Plenty of room for the photo though the "NBA HOOPS" logo at the bottom could have been much smaller.  The lack of the player's position is also a negative.  Otherwise I'm ok with the fronts.  The backs are pretty colorful as far as recent Hoops cards go.  Nice big logo, player info and write-up and all the player's stats.  Wow.  I love that.  My eyes aren't good enough to read them without my reading glasses but definitely a plus.  Nice cards.  Maybe not great but I like them.
Posted by Bulldog at 5:00 AM