There is only so much money to go around so in an effort to direct my attention towards getting cards I am seeking as opposed to random cards from packs I've decided to purchase specific team sets or player lots.  Packs are way too much fun for me to stop picking them up but team sets are a way for me to work towards a goal.  Team sets from every year of each of my teams.  To that end I picked up a lot of six Panini Atlanta Hawks team sets.  They only cost $3.33 each (shipped) so it seems like a decent deal.  They came in retail packaging.  Normally I see these sell $4.99.  I'm happy with what I received and I'll probably post all the sets over time.

To the cards - 2010-09 Panini Atlanta Hawks team set. I wasn't actively collecting when these came out so I wasn't familiar with this set.  They aren't bad looking cards but they don't quite stand up to today's sets.  They don't seem to have quite the gloss and overall have a cheaper feel.  But these were low end cards six years ago so I'm not complaining.  I'm ok with both the fronts and backs of the cards.  They aren't overdone yet have the basics (sans the player's position on the front) we are used to.  I am also happy with the player selection.  It is easier in basketball since teams only go about 13 deep anyway.  There were two different Jeff Teague cards, each having a different photo on the front and numbered differently on the back.  Otherwise everything is the same.  Not sure why but interesting.  Anyway a decent start to my team set building. 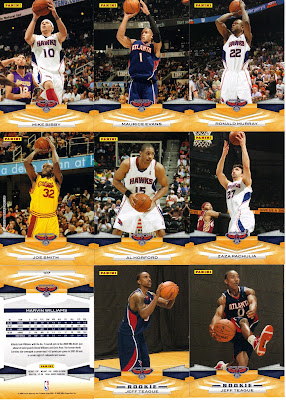