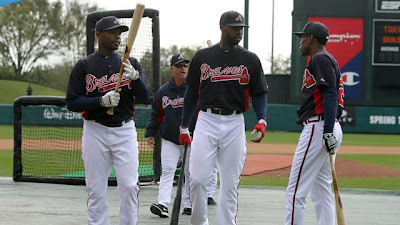 While the 2012 Atlanta Braves made the playoffs after a historic swoon in 2011 left them watching from home, I'm not sure it was that much of an upgrade. They lost their one game playoff series to the St. Louis Cardinals doing away in one game with what they had fought for for 162 games.  This off season Atlanta shook up the lineup and are hoping the pitching can once again be one of the league's best as the Braves look to no longer be a one hit wonder.

Thirty-seven year-old Tim Hudson will anchor the staff with his pitching and leadership.  He led all starters last year with 16 wins.  Hopefully this isn't "the year" in which age catches up to him.  Kris Medlan and Mike Minor will follow Hudson.  Both had good years last year with Medlan coming out of the bullpen for the most part.  This year each will need to guard against a let down as Atlanta will count on them as the number two and three starters.  Veteran Paul Maholm will be right behind the youngsters and inconsistent Julio Teheran will be the fifth starter until Brandon Beach returns from Tommy John surgery. Overall this is a nice group but with the youngsters and an aging Tim Hudson it wouldn't take much for the staff to be in disarray.
The bullpen is anchored by closer extraordinaire Craig Kimbrel.  No issues there.  The rest of the bullpen is filled with players who have helped Atlanta's bullpen be among the best in the majors the last two years.  They include Eric O'Flaherty, Johnny Venters, Jordan Walden (acquired from Angels), and Luis Avilen.  A few youngsters who pitched well in short stints with the Braves last year will round out the pen.  I like the bullpen and feel very comfortable with it going into the season.
The big news of the off season was the acquisition of the Upton brothers, Justin and B.J.  The outfield hasn't looked this good in some time with Jason Heyward anchoring right field.  Justin is the real deal young star talent.  Hopefully his brother will feed off the family reunion and be able to cut down on his strikeouts while getting on base better than in his time with Tampa Bay.  Heyward mature at the plate last year and Braves fans are hoping for even more this year.  First baseman Freddie Freeman also had a very good year leading the team with 94 runs batted in.  These four give Atlanta a great core with power and some speed while allowing Atlanta to exploit left right match ups.  Rookie Andrelton Simmons will take over at shortstop.  Looks like he can make contact but he'll be put into the lead off spot so we'll see if he can be patient while getting on base.  Brian McCann and Dan Uggla had bad years.  Evan Gattis could be the catcher of the immediate future if McCann can't bounce back or doesn't resign after this year.   Uggla has to have a better year this year or he may go down as one of the all-time worst free agent signings.  If he doesn't improve I'd be OK with him being moved sooner than later.  Third base has a big hole to fill with Chipper Jones retiring.  Newcomer Chris Johnson and Juan Francsisco will share time here.  I think Johnson has the edge with more time but is also a guy who can strike out a lot.  Speaking of, this whole lineup can strike out a lot.  Not saying they'll set any records there but if things are going wrong it could go way wrong.  But I like the changes.  The lineup has more overall pop than it has in years and should be better.  I don't think the offense will be derailed.  Too many good players here.
I like manager Fredi Gonzalez and think he has done well in his tenure with a group of, for the most part, young players.  The National League East will be tough as always.  Not sure what to expect from Philly but Washington has plenty of talent and I don't see a letdown there.  I think Atlanta makes the playoffs but again as a wild card.  I'm worried about the starting staff.  If all goes well the Braves could win the East but I'm not quite sure that will happen this year.  I'll go with 90 wins.  GO BRAVOS!﻿
Posted by Bulldog at 10:11 PM