Steven Jackson to the Falcons 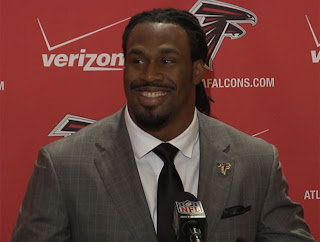 Steven Jackson signed with the Atlanta Falcons this week.  I must admit I have mixed feelings about this one.  Jackson is nearing the end of his career.  He averaged over four yards per carry and had another 1,000 yard season but I'm just not sold.  He has always been a guy you can give the ball to 250 to even 300 plus times a year and he'll get four yards a carry (4.2 career average/4.4 peak in three years).  So he is dependable but he isn't going to bust out long runs on a consistent basis.  And how much does he have left in the tank?

The good news is that he is consistent and pretty durable and hopefully the Falcons will get the same out of him for the next three years.  He is also only making $4M per season over that time so they didn't overpay and won't turn 30 until July.  I don't expect him to carry the ball 250 times as he'll share time with Jacquizz Rodgers.  Michael Turner was not productive last year and my hope is that Jackson can be the back who gets us short yardage when it is needed to keep drives going and gets the ball into the end zone.  Defenses will have to respect the run more which can only be a good thing.  I would have preferred that money to go to the defense but I'm willing to give this signing a chance.
On a side note:  Living close to St. Louis it has been interesting seeing this play out.  The Rams took the high road allowing Jackson to get out of his contract after last year even though he didn't hit the milestones which would have automatically given him that option.  Of course that served the Rams well.  They are rebuilding and the $7M he was getting paid will help the team elsewhere.  Jackson then had the opportunity to sign elsewhere and get a chance to go to the playoffs for the first time in his career.  And the fans here get that.  Unlike when Pujols left the Cardinals for more money in L.A., fans are happy that Steven Jackson may be able to finally get what he has been chasing his whole career - a chance to be a on a winner.  Good on ya St. Louis fans.