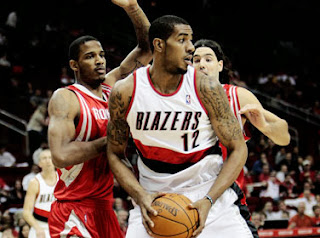 Last year Portland had a disappointing season on their way to 33 wins good for 11th in the Western Conference.  They ended the season with a disastrous 13 game losing streak.  Didn't leave anyone much to hang their hat on.  In the offseason they made it a priority to shore up their bench and their defense which were at the heart of the issues last year.

Damon Lillard was the rookie of the year and deservedly so.  He was not a good defender but his 19 points and 6.5 assists a game were great as he showed he was worthy of a top pick in last year's draft.  His ability to hit the three (36%) is a great attribute which helps stretch the floor.  Mo Williams will be his backup and may look to score before passing but should be a solid backup.

Wesley Matthews will start at the shooting guard.  Matthews is a talent but I want to see more than 14 points per game from him.  He shoots the three at a 39% clip.  Depending on how rookie C.J. McCollum progresses Matthews may not get the minutes he needs to be a big time scorer.  He will have the early part of the season while McCollum recovers from an injury to solidify his spot in the starting lineup.  McCollum should be a nice addition to the team with big upside if the scouting reports are correct.

Nicolas Batum will play at small forward with new addition Dorrell Wright backing him up.  Batum is making big money ($11M) and I'd like to see him take some of the pressure off Aldridge by scoring more and improving on his 43% shooting.  He is also good from behind the arc shooting 37%.  Wright isn't as good defensively but should be a quality guy off the bench.

LaMarcus Aldridge had his normal stellar year of 21 points and 9 rebounds a game while shooting 48%.  He will get, and deserves, the bulk of the minutes at the four.  They don't have much in a backup here.  Aldridge is key to this team but I think if Matthews and Batum can step up their games then he could play a little looser and play even better even if it is at the expense of some stats.

Robin Lopez was brought in to anchor the center position after J.J. Hickson left after the season.  Lopez won't win defensive player of the year but is a big body who I hope can defend the rim better than the undersized Hickson.  Not sure he can get 10 rebounds a game like J.J. but for now I'm just hoping he can bring some size to the middle.  Would have liked to see a quality backup here who could also play behind Aldridge but this is one position where I think Portland is thin.

I see no reason why this team can't get to 43 wins and a playoff spot.  They'll be fighting for the #8 seed but it is definitely doable.  This may not be the year they make much noise in the playoffs if they can make it but they are on the right track.  Great young talent here and if they can gel this team can be very good.  I hope the additions through the draft and free agency will make a difference on the bench.  Again, no reason this can't be a good team and I expect a winning record come the end of the year.