I've really enjoyed Topps Archives in the past so it was a no brainer to grab a blaster when the 2017 Topps Archives cards came out this year.  This year's set is a 300 card set with current and former players on cards based on the 1960, 1982 and 1992 Topps card sets.  I'm very happy I did.  I enjoyed these cards as much as last years.  My favorite cards were the Pedro '82, Rob Manfred '82, Tony LaRussa '92 and Johnny Damon '60. 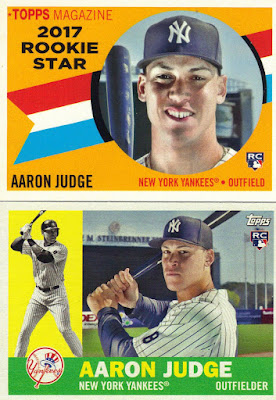 My big pulls were the two Aaron Judge cards (base and 1960 Rookie Star).  He is obviously a huge player in the eyes of collectors today so that is was fun to see these in the first couple of packs.

No huge inserts like an autograph.  Did grab the Judge 1960 Rookie Star, the Corey Seager Bazooka Baseball card, and a Derek Jeter retrospective card though.  Not a fan of the odd sized cards and the blasters also contain coins which don't do anything for me but one was a Mike Trout so that is a win.  I won't complain as those are personal preferences.  I pulled a redemption card (Kyle Schwarber) last year so I had my hopes up for similar success this year.  Still this was a fun box.

None of these cards are high on my lists of set designs but again I really like them. I think the fact that there are plenty of stars including retired players and three different designs with a new twist make this set standout to me.  Plenty of these cards will go into my personal collection and at some point I'll pick up more.  Too much fun to pass up.
Posted by Bulldog at 9:25 PM