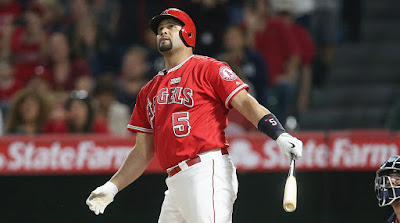 Albert Pujols hit homerun number 600 for the Los Angeles Angels last night against the Minnesota Twins.  His grand slam put him 9th on the all-time list with a real chance of moving past Ken Griffey Jr. (630) for 6th place next year.  He also has a good chance of passing Willie Mays (660) during his career if he stays relatively healthy.  Living near St. Louis I'm very familiar with Albert Pujols.  Albert is one of the greatest right handed hitters of all-time.  That is a fact.

Unfortunately since joining the Angels injuries have limited what Pujols has been able to accomplish. Combined with a 10 year, $240M contract that has been criticized since he signed it and Albert is not looked upon as well as he once was. Pujols is 37 now and still has four years left on the deal.  He has had three years of 30+ homers with the Angels but his .265 batting average and .793 OPS shows he is not the Albert that came to prominence in St. Louis. 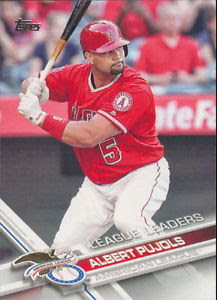 And it is shame.  Angels' fans have not embraced Pujols for the great hitter he is because they have rarely seen him play as well as they expect him too.  They see a huge contract and a player that is constantly hampered by injuries though he has played 152+ games in four of his five full seasons with the team.  The lack of coverage of his chase or 600 homeruns has in itself shown  how far Albert Pujols has fallen.  Him leaving the Cardinals was right for both sides.  St. Louis couldn't afford him at that price at his age and Albert could get so much more money with the Angels.  The Angels are seemingly the losers here.  Again it is a shame.  He was such a great, not very good, great hitter with the Cardinals and MLB and fans should be touting his rise up the charts.  Unfortunately too many things worked against him.  It is still a monumental achievement and I, for one, are more than happy to appreciate Albert for what he is in MLB history and enjoy his rise up the homerun chart.