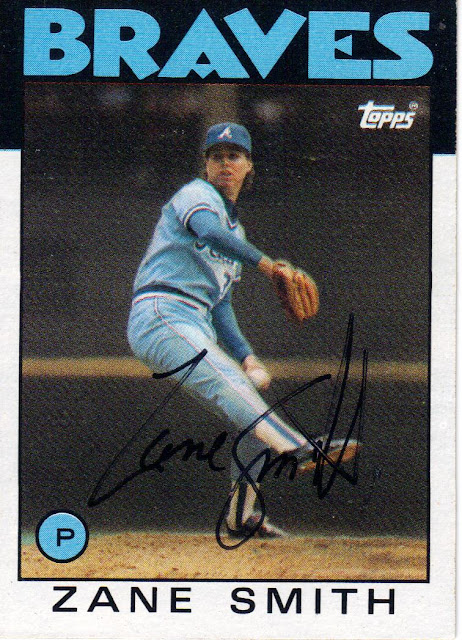 Zane Smith was a starting pitcher who didn't have a spectacular career but is a player I am a big fan of.  There is no rhyme or reason to why but he was an Atlanta Brave and Boston Red Sox which is obviously a good start and as a kid I don't doubt I thought his first name was cool.  I mailed off for his autograph but that is about all I remember.  I'm assuming I got the mailing address for the team via a Becket price guide or other sports magazine.  I must not of had many of his cards at the time because I really don't care for the '86 Topps cards.  I do like the photo on the card though and I love this card.  I think I  was in high school or junior college when I got this card and for me just the experience of getting an autograph is too cool.  I also got Harold Baines' autograph through the mail and will share that in another post.

Smith was only 39-58 with a 4.06 ERA in 6 seasons with with Atlanta. Traded to Montreal he had a great year as a reliever before going back to starting and ended up with the Pittsburgh Pirates in 1990 via trade.  He stayed there 6 seasons pitching in two National League Championship Series.  He finished his career with one poor season in Boston.   His 3.74 career ERA was pretty good considering he finished with a losing record.  He didn't strike out many but also didn't give up homeruns or walks which is always a big plus. 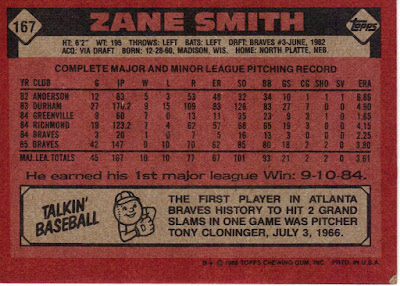