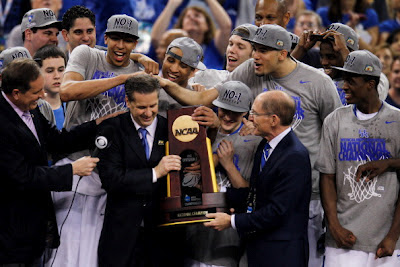 I'm not the biggest college basketball fan but I follow it during the season at a distance and like many others across the country I really get into it come tourney time.  I watched quite a few games this year and I couldn't have asked for more.  There were all the requisite close games and upsets.  That is what it is all about.

I did watch the Final Four games Saturday night.  What I took out of those was Kentucky is the better team and should have won last night which they did.  I was happy Kansas made a game of it late after trailing by double digits for most of the game.  Still, sloppy play in the final minute was the undoing in their comeback bid.  Don't get me wrong.  Kentucky won this game.  Anthony Davis definitely made Kansas leary of coming inside and in doing so I think they couldn't execute.  Too many times at the end of the game I just saw Kansas players setting perimeter screens for each other but not really getting open as Wildcat defenders knew they had great defensive help behind them.  I was rooting for Kansas, my buddie's favorite team, so there was some dissapointment but it was an enjoyable game to watch.  I am happy for John Calipari.  He is no angel but he recruited well and took his team to a championship.  You can't ask more than that.  This game won't go down as an all-time great but I enjoyed it and the rest of the tournament.  Now I can't wait until next year.
Posted by Bulldog at 12:29 PM