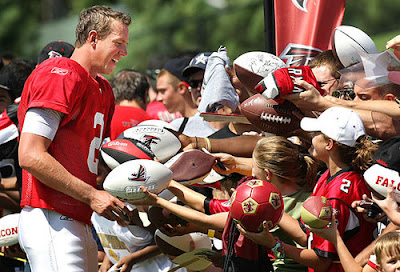 After last year's disappointing loss in the NFC Championship this year Falcons fans are looking at this as the year Atlanta goes all the way.  Will it really happen that way?  I hope so but it rarely works out that way for all involved.  New Orleans will have their coach back and many are looking to Cam Newton and the Panthers to have a bounce back year so this could go either way.

In 2012 Atlanta went 13-3, won their first playoff game with Matt Ryan in a squeaker over Seattle and then lost by mere yards to the San Francisco 49ers.  Great year for this team though the defense was iffy in the bend but don't break mold - gave up lots of yards and plays but held the league to the fifth lowest total points scored.  While the end was disappointing it was a heck of a ride.  Hard to get that close and not wonder "what if?".

Running back was a need and they got better with Stephen Jackson.  With his age and the yards on his body this is a short term fix but he is better than Michael Turner who gave us some great years but had nothing left.  CB Michael Trufant who was drafted in the first round is also a player expected to step right in and upgrade his position.  After that the Falcons lost key members of the offensive line (Clabo, McClue) how their replacements fair may be key the entire Falcons' season.  Matt Ryan got a big extension which was huge for the future of the franchise.  Hopefully he is up to the pressure that comes with a big contract.

The defense is crap shoot.  I would have liked to have seen a few more key additions to the line.  DE John Abraham is gone with Osi Umenyiora replacing him.  Is that better or worse?  No one knows yet.  The defense wasn't great already and the lack of a pass rush won't help the young secondary.  For now if they can sustain what they did last year it will be a plus but as we saw in the playoffs they were very weak against the young mobile quarterbacks.

So with all that said and, oh yeah, Tony Gonzalez back there is no reason not to be optimistic.  Atlanta should compete with any team in the NFC.  Still the NFC is very strong this year so  we'll need some things to break the Falcons' way.  Maybe the defense surprises us and Ryan improves on his good year from last year.  Everyone will be disappointed if Atlanta isn't in the Championship game again this year.  That is where I'll put them while I think they only win 11 (maybe even 10) games with a schedule heavy with very good quarterbacks (I'm hoping for a sophomore slump for some of those young quarterbacks around the league).  That means they'll need to win two playoff games just to get to the NFC Championship.  I think that is their lot in life this year.  Doesn't mean they can't.  They have the offense and the defense just has to keep limiting the scoring of their opponents.  Should be a very interesting year and I can't wait for September 8th when the season starts at New Orleans.
Posted by Bulldog at 10:17 AM