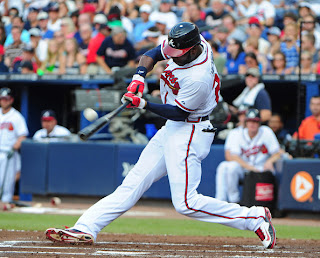 Jason Heyward is out 4-6 weeks after having surgery for a broken jaw suffered against the Mets on 21 August.  This is a huge blow.  While Heyward isn't having a great year overall he had responded well to being moved to the leadoff spot.  He was batting .348 in August with a .419 on base percentage and was key to Atlanta extending it's lead to 15 games in the National League East.  He'll miss most of the rest of the season.  I'd rather have him playing but for now I'll hope he will be ready to go in the playoffs.

This injury is not good news for the Braves whose offense isn't the most potent and the Braves as a whole have dealt with a ton of injuries this year.  His defense and veteran leadership are also a big piece of this team.  Six Braves have been lost for the season to include key pitchers Tim Hudson, Eric O'Flaherty and Johnny Venters.  Now the Braves also must deal with an injury to starter Brandon Beachy.  He had only five starts after returning from injury and now he may be out again for an extended timeframe.

Atlanta is a good team and their record shows it.  Still they need to catch a break with all these injuries or it may all be for not come playoff time.  I can only hope the rest of the lineup can step up and fill the void.  The Braves have lost three in a row to the Cardinals scoring a total a five runs in those three games.  I'm not panicking but definitely fatigued at seeing all these injuries.
Posted by Bulldog at 9:39 AM