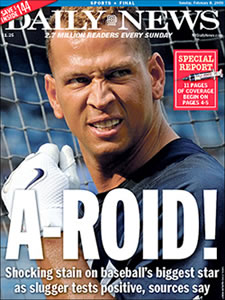 Mark Cuban "defended" Alex Rodriguez in an appearance on Jay Leno.  The story can be seen here.  First Mark Cuban has an axe to grind against Major League Baseball (MLB) because he has always thought MLB has kept him from owning a major league team.  That said I'm on board with the criticism.

I'll be the first to tell you I have steroids/PED fatigue.  I'm so tired of hearing about it on the radio, on every sports show, and online.  I'm also not a fan of Alex Rodriguez.  Like many I just don't find him that likable though I can't really put my finger on why.  He has admitted to using steroids.  That automatically puts him into a category of players fans will dislike - unless you are Andy Pettite (and Jason Giambi to some extent) who seems to get a free pass on the issue.  Still none of these players will be talked about without PEDs coming up in the conversation and none will sniff entry into the baseball hall of fame.

To the punishment itself, a 211 game suspension.  As Cuban has said there is a process in place.  First time offenders get a 50 game ban.  Yes, Ryan Braun got 65 games but I think that was a bit self serving.  He was going to get a minimum 50 games, the Milwaukee Brewers were out of contention and he was dealing with a wrist injury.  It served him best to just take the 65 games and move on without a fight.  Probably the right decision for him.  A-Rod has admitted use in the past but it wasn't during a time when MLB could punish him under the labor agreement.  So is this sour grapes on the part of MLB?  Those famous unnamed sources say there is other evidence of A-Rod obstructing the investigation.  Would that be like Melky Cabrera creating his own website to throw off investigators?  He only got 50 games.  Hmmmm.  It also leaves the door open for some to argue the big, bad Yankees have influenced MLB while trying to keep Rodriguez from ever playing for them again.

Without seeing the other evidence which is supposedly very damning it is hard to make a complete argument.  But for now I'm on the side of A-Rod.  Unless he went to some great extent to avoid being caught that involves other illegal activities, I think MLB may have bitten off more than it can handle.  I may be proven wrong but we'll know at some point.  MLB should have given A-Rod 50 games and called it a day thus saying not even the biggest in our sport are immune.  No he isn't the player he used to be but he is getting paid like he is.  Now the entire affair will be talked about to death for what most think will be another 3-4 months.  Does MLB really want to be dealing with this when everyone should be concentrating on the playoffs?  This is a fail for everyone.  No one will win with fans being the ultimate victim.
Posted by Bulldog at 11:56 AM