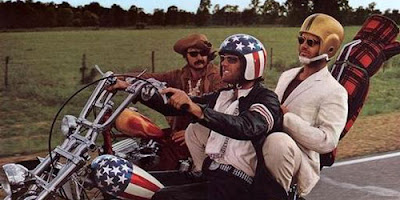 I've never seen this movie and thought it was something I should watch.  I like older movies and this one is a classic by some standards.  I will warn you now there are spoilers in this review.  Yes I know the movie is from 1969 but not everyone has seen it.  Here are the particulars:

The movie is nothing more than the characters played by Fonda and Hopper, Wyatt and Billy respectively, selling some dope and taking a road trip to New Orleans for Mardi Gras.  Not too complicated.  Of course there are adventures along the way.  First up is a rancher who helps them out when Wyatt's motorcycle breaks down.  Here we get to see the main characters eat a meal with the rancher and his family.  Next up is a hippie who needs a ride to his commune.  Once there they socialize a little to include some skinny dipping.

Back on the road they join a parade while driving through a small town.  This gets them put in jail where they meet lawyer George Hansen who is played by Jack Nicholson.  While he had been around for some time and this was a supporting role, this movie was considered by some as his breakout role.  Once getting out of jail, the three continue the trek together to New Orleans.  The locals and the police don't take a shine to the three when they stop for a meal in a small town in Louisiana.  They quickly leave town but are attacked in the middle of the night while camped.  George Hansen dies at this point and Wyatt and Billy continue on. 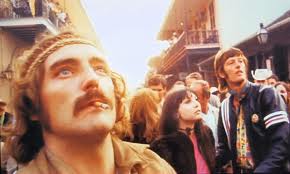 They make it to New Orleans and head to a local house of prostitution recommended to them by Hansen.  There they and two prostitutes take some acid given to them by hippie they took to the commune.  They are now at a local cemetery where the acid trip begins.  In true 60's style the filming style takes you along for the ride.

Once done in New Orleans Wyatt and Billy head out for Florida.  While on the road two locals end up killing the pair for no good reason.  And the there the movie ends.

You may think I left out quite a bit of detail.  That is true but again this movie was pretty straight forward and I probably didn't get the finer details as to provide much better insight.  A road trip with plenty of marijuana and some adventure. That was it.  I did like the movie.  I was pretty naïve going in actually thinking it revolved around a motorcycle gang.  Wyatt is the very laid back hippie type while Billy is the always hyped up character.  The movie flows fairly well if not aimlessly.  The dialogue is also pretty shallow.  That said Easy Rider was critically acclaimed and boasted a pretty good soundtrack.   Best of all it gave us the classic "Captain America" bike Peter Fonda rode throughout the movie which is pretty sweet.  I know this all doesn't sound like a ringing endorsement but again I liked it.  If you at all like movies from the time, have an interest in the counterculture of the period or are just curious you have to pick this movie up.
Posted by Bulldog at 7:43 PM