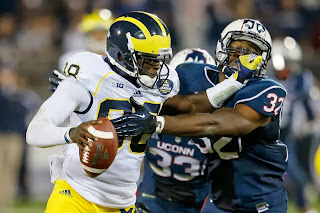 This was not a pretty game for Michigan.  Again.  After coming back late to beat Akron last week the Wolverines had to do the same this week to beat Connecticut.  Michigan was losing this game 21-7 late in the third quarter before rallying for a 24-21 win. Not at all what anyone, a fan or those associated with the team, want to see.

The running game is horrible.  The stats will say the Wolverines averaged 3.7 yards per carry and that running back Fitzgerald Toussaint had 120 carries on 24 yards.  But if not for some long runs in the second half neither of these stats would have been near as pretty.  Devin Gardner didn't shine at quarterback.  13 of 25 for 111 yards and two interceptions.  He also ran 19 times for 59 yards and a touchdown.  The defense was actually pretty good but had to deal with some short field due to turnovers by the offense.

Really nothing was working until the second half.  UCONN finally came back down to earth, the Michigan defense remembered they are bigger and better than the UCONN offense and the offense put up sustained drives which gained points.  I can't say I really though Michigan would win this game until UCONN's last desperate drive to try and recapture the lead before the end of the game.  Michigan now has an off week before playing Minnesota October 5th.  The schedule still favors the Wolverines but if they keep playing teams like this I don't think Big 10 teams will let them come back to win games.  This team has a long way to go to be a very good team no matter their national ranking.  I'm hoping coach Brady Hoke can get this team back on track.  That is a sports cliché but that is what needs to be done.  This is a talented team.  Probably not a top 10 team in the country but they shouldn't be duking it out to the last second in games against teams they should be winning comfortably against.
Posted by Bulldog at 8:04 PM