4th and Inches...Bills and Falcons Win Their First Game of the Year 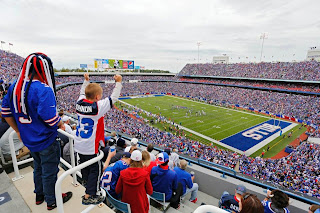 Buffalo beat Carolina 24-23 for their first win of the year.  Solid win which they can hopefully build on.  EJ Manuel had a good day throwing for 296 yards while completing 27 of 39 passes.  He added 1 touchdown (last second game winner) and had 1 interception.  The running game averaged 4.5 yards per carry led by CJ Spiller's 6.4 average (103 total).  Stevie Johnson caught 8 balls for 111 yards and that winning touchdown.  And that is what you want to see.  Your stars playing well.  Speaking of, Mario Williams had 4.5 sacks (Bills single game record) to help the defense which had 6 total sacks and 1 interception.  I really wish I could have watched this game.  Watching the score it started slow and then ping ponged back and forth between the teams.  From what I've read it seems the offense and defense played well.  I'm not saying they're playoff ready but it is definitely a game where the team and fans can be happy about the positives.  Buffalo gets the Jets this week in a game they can win.  A victory would really keep the good vibes flowing.  A loss to a bad Jets team will really make us wonder how good we really are.

Atlanta cruised to a big lead early but, as has been a bad habit, let the Rams come back to make it close.  Injuries were big in this game.  Five starters were out of the lineup by halftime including Stephen Jackson, LB Sean Wetherspoon, and CB Asante Samuel.  DE Jonathan Massaquoi tore his achilles and is now out for the year.  Jackson won't play this week against Miami.  There were positives including the play of Matt Ryan and Julio Jones who had to pick up the slack with Roddey White being nicked up and was a non-factor.  Jones is a stud who I think is definitely the top receiver on this team.  With Jackson going out after scoring his first touchdown as a Falcon the running game fell apart.  Atlanta ran the ball for a total of 36 yards with an average under 3 yards per carry. Again the offense couldn't put the Rams away until late.  Injuries probably hurt but this offense is good enough and the defense didn't help allowing 21 second half points.  Miami is undefeated and this should be a good test for both teams.  Players get hurt and the really good teams find ways to keep winning.  I'm afraid this will be a let down game.  Still it was good to get that first victory and Atlanta is still poised to be one of the best teams in the league.

I'm not saying the Bears or Jay Cutler are for real but they are winning and that is what matters.  They could throw a monkey wrench in someone's playoff hopes if they continue to play well...The Redskins look done.  Their offense has been average at best and the defense didn't show up against the Packers.  After last year this is a huge step back.  They can still get it together but I'm think any realistic thoughts of making the playoffs are done....Saw quite a bit of the Chargers game and was very happy to see them pull off the upset.  The offense did well and the defense held when they had to.  It was a fun game and showed the Eagles they aren't all that quite yet...There was no excuse for the play of the 49ers.  It was horrible.  They've given Seattle the mental edge at the moment and now must play from behind in the division.  Missed opportunity to send a message that they are the team to beat in the division and the NFC.
Posted by Bulldog at 11:43 AM