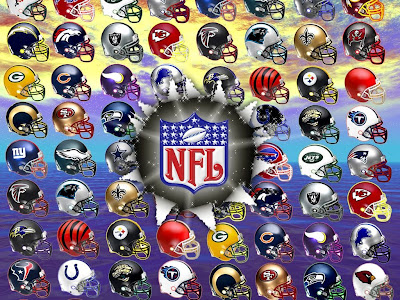 Wanted to weigh in on the upcoming season before it kicks off Thursday with Baltimore and Denver.  Speaking of - I'd be irritated too if the NFL put up a banner on my stadium of the opposing team's quarterback.  Now is it the worst thing the NFL will do this season?  No.  But it doesn't seem like the right thing to do.  Nothing too deep tonight but I love doing predictions and this is my chance to show off.  Well at least I looked pretty good last year which was a first.  See my 2012 predictions here.

Philadelphia winning the division is my big surprise as I take them to win the East.  I like the idea of their new offensive scheme and it seems Vick and the weapons he has are a perfect fit.  That means I think the rest of the East has to underperform or take a step back which is what I'm expecting.  Green Bay should win their division assuming they don't have any major setbacks.  I don't have the Vikings in the playoffs.  Peterson won't be able to carry them like he did last year.  Atlanta and New Orleans will make the playoffs from the South with Falcons winning the division in a close battle.   49ers and Seattle go from the West.  San Fran is stacked having talent all over the place.  The 49ers should return to the Super Bowl assuming Kaepernick doesn't have a major fall off in performance from last year.

I like Flacco and the Ravens but I'm expecting them to drop to the wild card after losing many of their key players to include the iffy trade of Anquan Boldin to the 49ers for a 6th round pick.  I know this was a salary dump but you can't tell me no other team in the NFL would give Baltimore a 5th round pick for a receiver of his caliber.  Shady.  So I see Cincy taking the division but it will be close.  I just like that team and think their defense will carry them to the title.  New England will be its powerful self but I think they'll falter again in the playoffs as it is doubtful their defense will be much if any better.  I love Indy and Andrew Luck but I think they'll have a drop from last years total of 11 wins but I really don't see anyone challenging them for the final playoff spot.  KC?  Too much to ask for.  Pittsburgh?  Don't think they have the defense to make it.  Denver should win their division though with the suspensions they've had on their defense means they probably won't reach 13 wins.  Still they are the team to beat in the AFC and I don't think anyone will come playoff time.

I really want to put Atlanta in the Super Bowl but I'm afraid their defense just won't hold up against the best teams and showed major issues against the young mobile quarterbacks.  I also want to jump on the Kansas City bandwagon but a nine or even eight game turnaround seems like way too much to ask for.  I could see them getting to .500 this year but no more.  Denver is too much and I expect a better year from San Diego.

Bottom line: Denver wins the Super Bowl.  They were one bonehead play away from advancing to the AFC Championship last year and the addition of Wes Welker will only make them better.  They did lose their starting center for the year.  This could be much more of an issue than I want to believe.  We'll see.  The defense needs to be as good as last year and things should be fine...in theory.