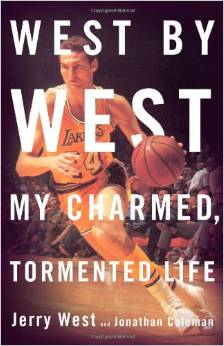 I never saw Jerry West play in the NBA.  I became familiar with him when he was an executive with the Los Angeles Lakers and through my love for the history of the NBA I've seen how great a player he truly was.  So I was excited when his book was released and I've finally had a chance to read it.  Boy was I in for a surprise.  I've read biographies and NBA books before and this was nothing like anything I'd seen before.  A quote from Jonathan Coleman who collaborated with West on the book says it best - "...Jerry emphatically did not want to write a sports book glorifying his accomplishments in a transparently self-serving way.  What he wanted was the opposite: a book that would illuminate and reveal what a very flawed, extremely hard on himself, humble individual, that would take the reader deep into his life while he explored his demons and hopefully succeeded in making sense of the difficult, improbable road he had traveled...".

That is a long quote but probably sums up the book better than I ever could.  In his book My Charmed Tormented Life Jerry West doesn't dwell into his life on the court, the NBA front offices, or the rest of the world for that matter.  Much of this book is spent on his mental state or how certain events or situations affected him.  I don't think I'm overstating that.  While he speaks of some of his exploits on the court and off it will all come back to how he deals with everything in life.  All I'll say is the word "tormented" is in the title for a reason.  This is not to say this isn't a good book because it is.

But it may not be for the casual NBA fan.  As I said every page is not far from where Jerry West was mentally at that given point in his life.  The book is chronological for the most part but the book can jump here to there and back without warning.  Also you probably won't find it with as much basketball information as you might expect from a man whose life revolved around the sport.  Again this is a good book.  I think if I'd known going in about West's fight with his own self I would have been better prepared going in.  Here is a review that may do a better job of dissecting some of what I've tried to explain.  There is plenty of basketball talk here.  It is just normally wrapped in how it affected Jerry West.  If you are a fan of Jerry West aka "The Logo" or the Lakers I highly recommend the book.  Casual fans may want to flip through the book some to see if this is the read for them.
Posted by Bulldog at 9:36 PM