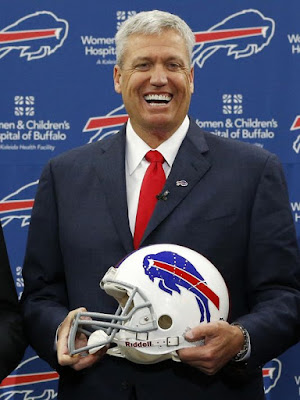 The Buffalo Bills won nine games last season and just when you thought things might be on the upswing, head coach Doug Marrone quit over the winter.  These are Bills...  That could have been a huge hit to the team but I think the Bills turned that around with the hiring of former Jets head coach Rex Ryan.  I like him on many fronts.  While his 46-50 head coaching record isn't great, and it is what it is, he brings something to this team.  First he did take the New York Jets to the AFC Championship two years in a row after taking over as coach.  Yes those were his best two seasons.  Still he brings a big personality to the team.  This is something the team has lacked forever.  Will it win them any games?  Probably not but it is still a positive.  This is a guy who can have some fun while still understanding the pressures of running an NFL team.

The offense should be better than last year.  It has to be, right?  It was pretty bad as EJ Manuel still hasn't developed into an NFL starting quarterback and the Bills had to go with veteran Kyle Orton in 2014 but has since retired.  Buffalo did pick up Matt Cassel to compete for the job.  It still doesn't look like Ryan knows who his starter will be but I'm betting he'll go with Cassel if Manuel hasn't clearly shown he is the guy.  Running back sees a huge upgrade with the trade for LeSean McCoy.  He is a durable stud who should produce in both the rushing and receiving games.  If healthy, Fred Jackson will be the more than capable backup.  Receivers Sammy Watkins, Robert Woods and new tight end Charles Clay anchor the receiving corps.  The biggest questions will be on the offensive line.  Hopefully it can be better than last year.  This will be key to what was a horrible rushing attack and whoever the quarterback will be.  The good news is the offense was so bad you'd think it would have to improve this year.  I think the additions of McCoy and Clay will help.  I just don't know what the quarterback position will bring.  If nothing else Cassel is a capable quarterback with a 96-70 TD to interception rate and has won 10 games with two different teams.  I'm definitely in a wait and see mode when it comes to the QB.  It has been way too long since we've had a capable signal caller.

The defense was really good last year.  Fourth in the NFL in scoring allowed, third in passing yards allowed, sixth in interceptions and first in sacks.  This defense is the real deal with the defensive line, linebackers and defensive backs all playing well.  They are anchored by defensive end Mario Williams, tacles Marcell Dareus and Kyle Williams, and cornerback Leodis McKelvin.  I don't know if they can be better than last year but there is no reason to think they can't be just as good.

Overall there is no reason to think this team can't be better than last year's.  The defense is excellent and the additions on offense should make a difference.  Unfortunately the unsettled quarterback position is probably the key to how the season plays out.  The schedule isn't an easy one but again their top notch defense should keep them in games.  Hopefully Rex Ryan won't disappoint and can get something out of Cassel or Manuel.  I'm thinking 9 wins is doable.  With good quarterback play they can get to 10 wins and compete for a playoff spot.  That may sound like I'm being overly optimistic but I am a Bills fan... 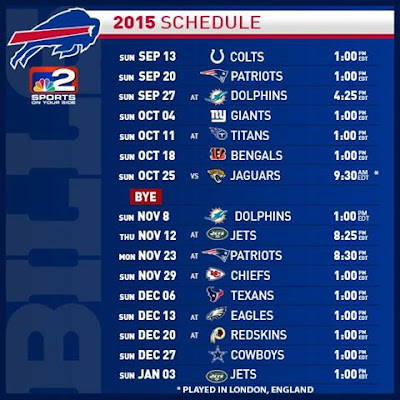