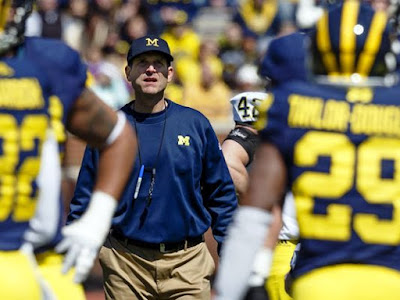 If nothing else this year should be fun for Michigan Wolverines' football.  It may not be fun for the football team or new coach Jim Harbaugh but it should be for everyone else.  While expectations are not too high this year, Michigan fans and the media will always expect more and everyone is excited for this year as Jim Harbaugh helms the team for the first time at his alma mater.  First the hiring of Harbaugh is a win.  He was immensely successful at Stanford and with the San Francisco 49ers.  While this may not equate to many wins in the immediate future it should help the Wolverines compete as well as bode well for the future.  I'm excited just for the excitement factor he brings.  Hopefully it will translate into a few wins.

Quarterback will be Harbaugh's biggest task as Shane Morris battles Jake Rudock, a trasfer from Iowa, and a highly touted true freshmen.  Whoever wins the quarterback battle, they aren't expected to put up huge numbers which could hurt the team's progress this year.  The running game should be ok while the line does have issues.  So while the 112th ranked offense should be better this year it is hard to say how much better.  Each position will have to get better as there is not once group that can carry the others.

The defense was very good last year.  Twenty-four of twenty-nine defensive players return this year which can only be a good thing.  The defense also adds freshman safety Jabrill Peppers who should be able to make an impact this year.  They will run both 4-3 and 3-4 sets this year.  I like teams that can do that successfully.  Hopefully this team can build on last year's success with the new schemes.  With the offense still an enigma the defense will have to be good keep the team in games.

Overall I think this team should be happy with eight wins if they can get there.  Harbaugh won't be happy with that but he never is.  Hopefully his intensity and excitement rubs off on the players.  If so they could definitely get to a .500 record.  Their schedule is not that tough so there is hope.  I won't be too disappointed if they don't get to eight wins.  This about the future and hoping Harbaugh can return the Wolverines to national prominence. 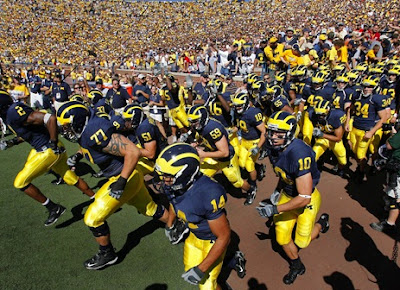