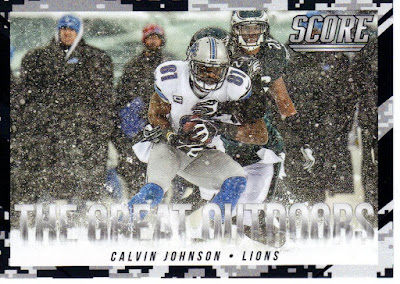 I picked up two packs of the 2015 Score NFL cards for a total of 24 cards.  This is a nice looking set and definitely a step up from the 2014 Score NFL offering.  The front has a white border, with the player's position written out going down the left of the card while the player's team goes down the right of the card.  Each is within the white border as it expands inward towards the middle.  The photo is centered with the team logo in the upper left, the player's name at the very bottom in team colored foil, with the Score logo just above his name.  At the bottom of the card on each side is are diagonal stripes also in team colors.  I like the photographs, how they take up more of the front than last year, and the team logo.  Like last year the Score logo is too large. A logo can be prominent while not taking up so much of a card.  The team name and position seem somewhat awkward while also making the border look too large.  Seems like they could have figured out something better.  Overall it is a good front.  Props for the logo and photography.

The backs have a portion of the front picture (head shot) in the upper left, The player's position, team logo, key stats, and the player's birthday are to the right of the photo.  It is an odd grouping.  Below all that is the player's height, name, team, and weight.  Below that is a quick write-up followed by the player's stats from last year and his career totals (cmp, att, cmp%, yds, td, int, rate, att, yds, td).  Those last three stats are rushing though it isn't spelled out.  The very bottom has the NFL, Panini, and NFLPA logos.  Not a bad back.  It is busier than most but that isn't a bad thing.  It catches the attention and makes you pay attention.  Many backs are very forgettable.

I pulled the following - 11 base cards, 6 rookie cards ("RC" on the front instead of team logo), 2 team leaders, 1 sophomore selection, 1 franchise, 1 the great outdoors and 2 gridiron heritage cards.  The Great Outdoors Calvin Johnson is a great looking card.  I love me some retro so the Gridiron Heritage Len Dawson and Bret Farvre cards were great pulls.  There are other subsets I didn't pull and am hoping to maybe grab some in the future.  Overall these are nice cards.   I'll definitely pick up some more as the NFL season ramps up and there is no reason for everyone not to give this set a shot.
Posted by Bulldog at 7:13 PM