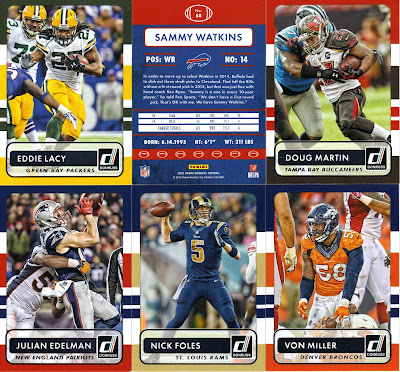 I returned from a trip last week and walked into my local Wal-Mart not expecting much in the trading cards section but I saw the new 2015 Donruss football offering. So I picked up two packs for a total of 80 cards.  I was blown away.  I haven't been this excited about a set in quite a while.  In fact I probably went overboard.  I picked up an additional pack a day later and four more packs today.  Yes, that is seven packs.  I rarely do anything like this so it has been a blast and I really wanted to share some of my finds.

I like the front which really reminds me of those 80's Donruss baseball sets which had the same type of striped border.  While not normally something I go for I really like it.  The rest of the front is fine but they committed a huge faux pas by not putting the player's position the front.  I really do not like it when a company does this.  The photos are good and they did a good job getting players in their current team's uniforms.  The backs are pretty basic but I like the color and layouts.

The base cards had three red parallel cards per pack and had many subsets and inserts which was great.  My favorite by far were the Gridiron Kings/Legends and the Elite Passing the Torch cards.  Great photos with a mix of current and former players.  You'll also find the Rated Rookies cards that Donruss is known for as well as base cards featuring players from years past.  I love the retired player cards.  Another great thing was the fact that I had few doubles until I hit the seventh pack which surprised me.  I kept expecting to see doubles pretty early but it was rare through the first five packs. 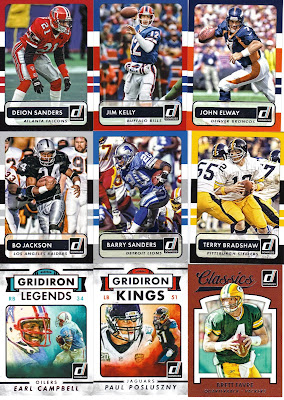 Again I love this set and I think all the inserts, the old-timers and design do it for me.  My favorite cards I pulled are the Deion Sanders (in the awesome red Falcons jersey), LaDainian Tomlinson Passing the Torch, and Gridiron Kings/Gridiron Legends cards.  I enjoy art cards and Donruss has always knocked it out of the park with their "Kings" series.  I was of course excited to get the signature card and the numbered cards, especially the Mariota offering.  Not sure what I'll do with them next but it sure has been fun which is what it is all about.  I'd love to hear what everyone else thinks of these cards.
Posted by Bulldog at 8:13 PM