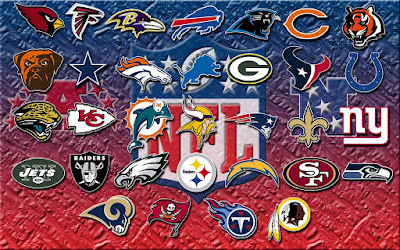 We'll get right to it.  I'm very happy it is all about football now and not the off season stories that have dominated the news.  Here are my famous, maybe not so famous, predictions.

I'm still waffling on the Atlanta pick but that division is weak and who really is going to come out of there?  New Orleans doesn't have a defense, I'm not sure Carolina's offense is any better than last year, and Tampa Bay's season hinges on a rookie quarterback.  I'm not saying Atlanta is built to succeed but in a bad division maybe the new head coach can coax some immediate improvement from them.  Again that pick could change.  Philadelphia is also a team pick that might raise some eyebrows.  I normally don't pay any attention to the preseason but Philly's offense really looked good.  I may eat my words and wish I went with Arizona but I'll stick with Philly.  I think Seattle goes back to the Super Bowl and wins their second championship.  They still have a great defense and the offense got much better with the addition of Jimmy Graham.

San Diego is probably the only stretch in the AFC.  That left out Kansas City.  I really want KC to do well but I think they take a step back this year.  My buddy actually talked me into this without even trying.  I really like Phillip Rivers and their running game and defense could be better this year which means playoffs to me.  The AFC will have plenty of teams vying for that last playoff spot so there are probably four teams that could land here.  If Indy fields anything resembling an average defense they are my AFC Super Bowl pick.  Not saying they'll win it all but I think they can get there.  Pittsburgh may play them in the AFC Championship but don't rule out New England being there though it will be tough for them to get back to the AFC title game.

The individual stories I'm looking forward to will lean towards the older crowd.  What?  A crowd of superstar quarterbacks in the NFL are aging.  This could be Peyton's last year.  Brady is like 38, Drew Brees is getting up there, Tony Romo is 35 and Big Ben and Phillip Rivers aren't getting younger.  We've seen a golden age of quarterbacks the last decade.  Things are changing and I'm definitely going to enjoy the remaining seasons of each.  Other than that I'm curious to see what Chip Kelly has built in Philly, can the Tony Romo of last year show up again, and can Detroit get over the hump?  Should be a great season as always as long as we aren't talking about off the field issues week after week.
Posted by Bulldog at 9:00 AM