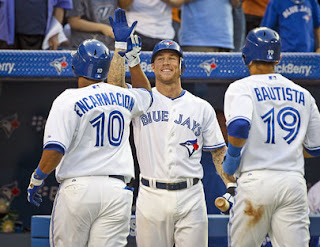 Baseball season is winding down and the playoffs will be upon us soon.  I want to touch on a few highlights for me as we get to the stretch run.  First off I have to talk about the Blue Jays.  Wow.  This team has been on a tear since July 29th.  Their offense has outscored opponents by 191 runs this season!  Only two other teams have outscored their opponents by over 100 runs.  Add to that they seem to hit homeruns every other at bat this team is fun to watch.  The Jays' pitching is average but this team will be tough to deal with come playoff time as long as their offense is hitting.  The Royals have the easiest rode to the playoffs currently enjoying a 13 game lead within their division.  Didn't see that coming but I love Kansas City having success after suffering so many years.  The American League West is all upside down.  The Astros currently have a 4 game lead over Texas and a 7.5 game lead over the Angels.  Who?  What?  Crazy but I love it.  Houston is another franchise that deserves some love for their long suffering fans.  While I love it, I wouldn't be surprised if the standing in this division change again before the end of the season.  The Twins and Yankees should also be applauded for the nice seasons they have put together when little was expected either of them.

In the National League the Cardinals just keep winning.  Their stud pitching staff carries them while the 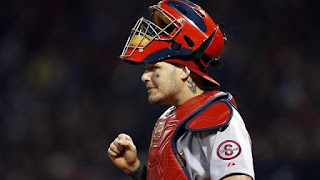 offense is average at best.  It is almost a shame as Pittsburgh and the very surprising Cubs are having very good years but may be destined to meet in a one game playoff.  The Dodgers aren't great but with Greinke and Kershaw they are not a team you want to meet in the playoffs.  No they can't pitch every game but they could win every game they start which will make it tough for any team to counter.  The Nationals have struggled allowing the amazing Mets to surge to a nice 6.5 game lead.  Very happy to see them do well but I, along with many, thought the Nationals could be the team to beat.  I just don't get what happened.  Don't blame it on Bryce Harper though as he has had a wonderful season.

It has been a very exciting season with many stories we didn't expect.  It makes for a nice change.  The St. Louis Cardinals seem to be the one constant.  I look at this team and it just doesn't seem that scary but they are good.  Still there are lots of stories and who knows what will happen come playoff time.  I for one hope we'll see some new blood win a championship this year.  It is great for the sport and fans to have the different markets compete.  May not be great for ratings but that isn't what it is all about.  It is about players, owners, managers, teams, and fans who bleed team colors and deserve a chance to celebrate a championship.  Since my Braves and Red Sox are out of it, so out of it, I'm rooting for Pittsburgh in the N.L. and Houston, Kansas City, and Toronto in the A.L.  If nothing else it should be fun as always (except for the one game playoff but that is a different post) the next two months.

Email ThisBlogThis!Share to TwitterShare to FacebookShare to Pinterest
Labels: MLB 2015