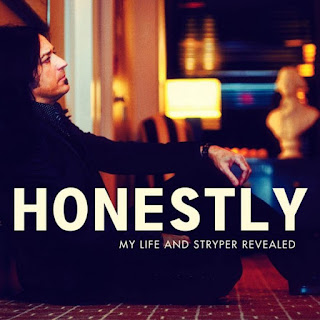 Michael Sweet is the lead singer of the band Stryper who rose to fame in the 1980's.  Stryper is a christian rock/metal band that was part of the hair bands that came from the decade.  They, as most, bands have had their ups and downs and breakups.  They are currently together putting out albums and touring.  I was first introduced to Stryper through a school newspaper article.  I picked up their album The Yellow and Black Attack and I was hooked.  While there was plenty of rock out there at the time, this was new.  Rock with a positive message.  I soon saw them on tour which solidified my fandom for the group and I've been a huge fan ever since.  When lead singer Michael Sweet's autobiography came out last year I jumped on it.

Honestly: My Life and Stryper Revealed is a good book, not a great book.  Michael Sweet opens up about life in Stryper and life in general.  The biggest takeaway from this is I sense Michael Sweet has a chip on his shoulder.  He seems to be defending himself throughout the pages and at times comes off as self centered.  That may be negative but I want autobiographies to be honest and I think we get that from Michael Sweet.  The book itself takes you from his early childhood, through the forming of Stryper, their rise, the band's career, their breakup and their getting back together.  Throughout he talks about his private life to include his family's influence on his musical life, the loss of his wife, and his new wife.  While I enjoyed the book, I thought it was short on some details or information.  I wasn't looking for a 1,000 page encyclopedia.  There just seemed to be places where more detail seemed appropriate.  Without going into specifics he would make a point about something but would not answer what seemed like the next appropriate point, like "what happened then".  Or large periods of time would be glossed over.  Again a ton of detail isn't necessary but maybe just more info to help the reader feel like it is time to go to the next topic.

One thing I had to remind myself is this isn't a book about the band itself.  So I think sometimes I wanted more information on what happened that would probably be more appropriate in a book specifically about the band.  With that in mind Michael Sweet did a good job telling his story and the book is an easy read.  Again I'm surprised somewhat with how he always seemed to be defending himself or having to describe how he was the one with the plan or looking out for everyone.  He may be absolutely right in how he frames things but for me it was a theme throughout the book and I have to wonder.

I am a huge Stryper fan and a Michael Sweet fan.  I did enjoy the insight into Michael Sweet's life as well as that of the band.  There are definitely facts I never knew before which helps me paint the mental picture I have of Stryper.  Filling in some of the gaps while also providing focus on events that there wasn't much public knowledge of.  I think most Stryper fans will want to read this but I'm not sure many outside that circle (metal heads maybe) will.  I do think all Stryper fans should and anyone remotely interested in Michael Sweet and Stryper should. 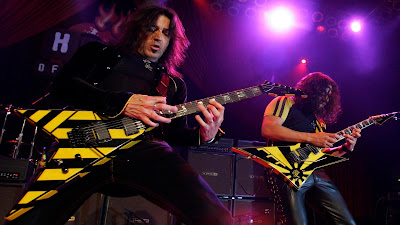