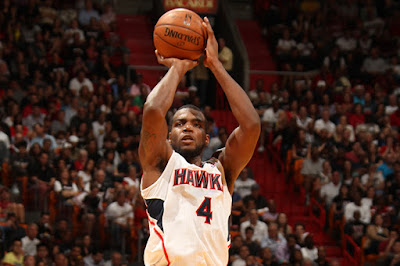 The Atlanta Hawks won 60 games last year which is a great season by any standard.  Still they slowed some down the stretch (Milsap's injury didn't help) and were vulnerable in the playoffs (even before the Korver and Carroll injuries).  It really made me wonder if this team can make it as a true contender.  So I was excited to see what the team would do going into the off season.  And I left truly disappointed.  DeMarre Carroll left via free agency and the major acquisitions were Tim Hardaway Jr., Justin Holiday, and Tiago Splitter.  While they may be nice additions they aren't game changers.  And much of them being nice additions depends on how they hopefully get better this year while fitting into the Hawks' scheme.

Jeff Teague once again anchors the team at point guard.  He is steady and one of the better point guards who can give you points when you need it.  Dennis Schroder is a good backup who shows flashes of brilliance but his jump shot is iffy.  Kyle Korver will return as the three-point shooter who helps set it all up.  I'd still like to see his output increase (12.1 PPG last season) but there is some truth that he helps the system by making teams guard him close why making them pay with his outside shot when they don't.  Kent Bazemore is a decent backup but don't expect anything fancy from him.

Thabo Sefolosha will try to replace Carroll which will be near impossible to do.  He is very good defensively but isn't as good a scorer.   Hardaway Jr. and Holiday will also get minutes at small forward.  Atlanta is really hoping a change of scenery does Hardaway some good and he can up his shooting from the three point line.  Milsap should be good for 16 points and 7.8 boards a game again this year.  His passing in coach Mike Budenholzer's system is almost as important as the other stats he puts up.  I've never been a huge Milsap guy but I have to admit he works in this system well.

Al Horford is back to be the big man.  Like we say every year he is an undersized guy playing center but does a great job of doing just that.  He can be as good as any on his best nights.  I know it is too early to be thinking about this but I worry about whether or not Atlanta will be able to resign him at the end of this year.  I'd hate to see him go. Tiago Splitter will spell Horford and will also log minutes at power forward.  Coming from the Spurs one would hope he can adjust quickly to his new team.

This is a good team but Atlanta really didn't make any impact moves leaving the Carroll departure as the biggest thing to affect the lineup.  Can Sefolosha or someone else step up and fill that whole?  I'm not sure.  I think Atlanta is good when firing on all cylinders.  Last year worked but now that Carroll is gone how big a deal will that be?  Budenholzer will have to figure that out moving forward. I think 50 wins is doable for the Hawks and maybe, just maybe they can get back to the conference finals.  Believe me I am hoping.